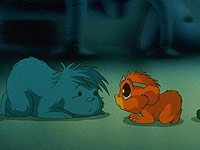 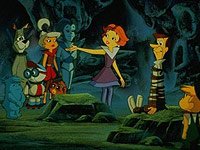 Right off the bat, I have to say that this has a AWESOME soundtrack. Although a Hanna-Barbera production, it takes a kind of Disney "musical" approach with animated song sequences - but with contemporary (for the time) production with the likes of Tiffany and others providing power ballads, pop-rock, swingin' beats and cheesy rap.

The animation is perfect. The colors are magnificent (e.g. during Judy's song sequence at the new mall). The minimally used CGI is inoffensive. There was an era when CGI complemented cel animation rather than dominating it, and Jetsons: The Movie fits into that happy medium. If there's one issue I took, it was that I initially felt the light shading on the characters were a tad overdone. You quickly get used to it though.

Review by willman85 from the Internet Movie Database.