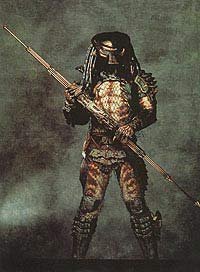 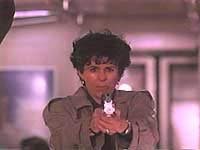 In this disastrous sequel to the vastly superior Predator, we are left to wonder whether someone actually, in good conscience, thought it would be a clever idea to move the Predator into downtown LA, or whether it just took place closer to the movie studio because no one in their right mind would bankroll a film like this, so they couldn't afford any location shoots. My money's on the latter. And another thing, Predator 2 is set in the distant future (far off 1997!!), why would they do something like that? The movie came out in 1990 and then there was only seven years before we saw that downtown LA (specifically the criminals) do not look anything like they are portrayed in the movie. Look at Back to the Future II, for example. It was made almost 20 years ago, and there is still more than a decade before we will all see how wrong they were in predicting what the future would look like. At least the rest of the movie was good.

The streets of LA look a lot like they did in the Robocop movies, and the criminals look like they did in Robocop 3, by leaps and bounds the worst of the series. We get all these criminals who are dressed up like circus clowns, and the movie even throws in some crime kingpins that look like caricatures of witch doctors and whatnot. Like they were flown in straight from the mountains of Nepal and asked to say a few lines for the camera. Is this supposed to create the sense of isolation and unfamiliarity that the first movie created so well? Please.

Danny Glover takes on the role of Lieutenant Mike Harrigan, basically the leader on the search for the killer who keeps leaving bodies stripped naked, often with things like heads and spinal cords pulled out (not cut, but pulled) and hanging upside down, until the FBI, I think, shows up to take over the investigation. The endlessly watch-able Gary Busey steals the spotlight in every single one of his scenes, but mostly because Glover, also a massively talented actor, for some reason gives a halting and simply bad delivery of his horribly written lines.

Busey's character is also pretty badly written, but he has such a recognizable presence that you almost don't notice. Ironically enough, it works to Busey's and the movie's advantage that he simply plays the same character that he almost always plays in his movies -' himself. The script is so full of clichés and unrealistic conversation that it sounds like it was written in an afternoon, if that. Had the writers read these lines out loud to themselves while writing it, I assure you they would have realized how ludicrous it sounded.

The movie starts with a ludicrous shootout scene between the cops and entire herds of criminals, as the two gangs, you might say, fight for control of the streets. In the pessimistic future view of the movie, much like the Robocop films, crime is out of control, and as you see here, the police are out-manned and outgunned by the drug gangs on the streets. The Predator watches over this whole shootout, always out of sight, no doubt wondering why these creatures are so intent on killing off their own kind.

Here's another interesting irony of the movie, the Predator, as is to be expected, comes with all kinds of new weapons, a remodeled mask, and lots of cool gadgetry, some of it meant for self-applied medical treatment, and yet some of the things that are brought over from the original film are just botched. We learn in this movie that the Predator doesn't make himself invisible, but is somehow able to bend light. That's even more impressive than invisibility! It almost gives you the perception that the Predator carries at least some of the power of something like a black hole, but the shimmer effect is just badly done here. I would have thought that a newer movie would have been able to improve upon the one from a few years earlier.

Bill Paxton, 4 years after his performance as the over-the-top and entirely too cocky Private Hudson from Aliens, turns in a performance in this movie as exactly the same guy. Overly confident despite being in completely over his head. His role here, as he explains in his interview on the DVD, is to act entirely too sure of himself, like Billy the Kid, until he realizes what he's up against, at which point he turns into the whining baby that he was in Aliens.

The only thing that the movie successfully brings over from the previous film is brought over as an excuse to allow a lot more guys to get killed and to make an excuse for the weakness of this movie's plot. The original team killed off by the Predator in South America was a top secret elite team of special forces, as Peter Keyes (Busey) explains to the clueless Harrigan (Glover), which is why the police forces involved have no idea what's going on. This allows for plenty of deaths before the FBI can convince the insubordinate police force (Harrigan, as it were) to believe them that the drug gangs are not involved here, and that they really do need to back off. Seriously, guys. Let us handle this. It's top secret. Harrigan, come on, back off. You don't know what you're dealing with. You don't have the resources or the knowledge to fight this enemy. I know that your friend was killed, but you just have to let us handle this. We know how to get this guy. Come on, Harrigan. I can't tell you what it really is, just let us handle it. OK fine, you see, there was this elite team in South America...

The best scene is the hunt scene about three quarters of the way through movie, and it's not good that this is the best scene because it is monumentally stupid. They come up with this great plan to have a room flooded with ultra-violet light while all the men wear these heat-proof spacesuits so the Predator can't see them and on top of that, they put this special dust in the air that will adhere to the Predator's body and make him visible. Great plan, except for the massive flashlights that everyone wears on their shoulders. This is the FBI! I learned in 7th grade that almost without exception, there is NO LIGHT WITHOUT HEAT. Did the FBI not realize that these flashlights were going to generate heat? My GOD.

The Predator is just as ugly as in the original, but the mask has been reduced to a cheap Halloween mask, almost as bad as the Green Goblin's mask from Spider-Man. He's got this cool boomerang weapon that seemingly can cut through anything that it comes into contact with, but he talks in this movie. I hate that. Here's this alien, and he learns English just enough to deliver a couple of one-liners at exactly the right moments. At the time of this writing I have yet to see Alien vs. Predator, but I can only hope that they don't talk to each other in it. Leave the talking to Freddy!

(spoilers) The grand finale of the movie starts off with a massive hole in both the script and basic logic. Harrigan finds himself hanging from the cables beneath an elevator as it descends, and he's screaming at the people inside it to stop the elevator so it doesn't crush him. Forget the fact that elevators stop a good 6-10 feet above the ground at the bottom of their shafts, this one not only has a rough hole at the bottom, but when Harrigan lets go of the cable, he falls through it and into a massive open area. The scene could ALMOST be saved if it were the basement, but it turns out to be the Predator's cavernous lair. Right there in the basement of some building in downtown LA. And no one ever noticed. We get this lengthy fight scene between Harrigan and the Predator, after which a whole crowd of Predators shows up (why they didn't come out to help their friend is not explained or wondered about), so Harrigan accepts defeat, but it turns out that they only wanted to come collect their dead and give Harrigan a gun from the early 18th Century, raspily muttering, 'Take it.' What the hell is this??

Predator 2 is such a bad film that the Predator is the hero rather than the villain. He is the center of attention and we are watching to see these clueless morons get killed by him rather than to see them use their tactical expertise to do away with this unknown enemy, as was the case in the original film. Director Stephen Hopkins has turned the movie away from the actionsci fi of the original and into a horror movie. It's just too bad he couldn't do the same with the comedy that he worked on before this movie, A Nightmare on Elm Street 5.

The movie ends with a hint at a Part 3 (with the line 'They'll get their chance.') and I can only hope that AVP is that movie, because the last thing we need is more of this!

Review by Michael DeZubiria from the Internet Movie Database.