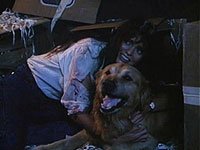 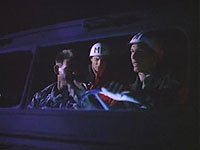 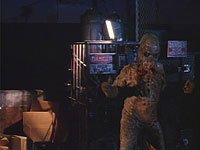 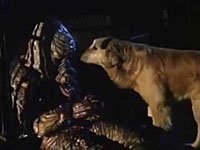 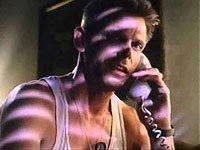 Watchers II focuses on a secret genetic experiment named 'Project Aesop' that has thus far produced a super intelligent dog named Einstein & a monstrous deformed mutant creature (Tom Poser) who are both psychically connected with one another. During an unfortunate incident in the lab two NSA agents are killed by the creature, the top woman in the job Dr. Glatman (Mary Woronov) orders it's creator Dr. Malceno (Jonathan Farwell) to destroy it which is an idea he is not too keen on. Dr. Malceno devises a plan to move the creature to safety by creating a distraction so he lets animal rights activists into the lab to cause havoc but things don't go according to plan & the creature escapes as does the super intelligent dog Einstein. The creature wants Einstein but the dog is picked up by Paul Ferguson (Marc Singer) who doesn't know what he has gotten himself into. The creature will stop at nothing to get Einstein & starts a murderous campaign of terror to find the dog, Paul quickly becomes aware that he is being hunted by a monster & decides the best form of defence is attack...

Directed by Thierry Notz this is the second Watchers film in a series that now totals four films, the original Watchers (1988), this, Watchers III (1994) & finally Watchers Reborn (1998). I must say right now that I have not seen any other Watchers film so I cannot compare them, sorry. The script by Henry Dominic is based on a novel by Dean R. Koontz (haven't read it so I can't compare Watchers II to it either) is really silly, it's stupid, moronic & you can't quite believe what your seeing on screen but when all said & done I enjoyed it for what it was & at least it entertained me which is all I ask for when I watch a film, to be entertained. It moves along at a good pace & is never boring or dull & it's certainly that little bit different which I'm sure most people wouldn't argue with. Of course it goes without saying that Watchers II is far from a brilliant film either conceptually with it's super intelligent Golden Retriever who can understand English & type on a computer keyboard or the creation of a hostile creature for no good reason whatsoever, or technically as it's a pretty low budget affair & it shows. I loved the scene when the monster walked up to a couple of homeless wino's & started drinking with them! Watchers II takes itself very seriously which actually worked & made me smile on a few occasions at just how daft it was getting.

Director Notz does an OK job, some sequences are lit quite well, he keeps the film moving along & there's a decent low budget horror film vibe running through the thing. There isn't much blood or gore, someone is impaled on a hook, there's a decapitated head in a toilet, a clawed back & some splashes of blood & wounds but that's about it.

Watchers II must have had a pretty low budget as the monster suit itself is pretty poor, it's obviously just some guy stuck in a rubber suit & the head & mouth have no movement at all, it actually reminded me of the monster from Monster in the Closet (1987)... a bit. The acting was OK, V (1984) fans will recognise Singer & everyone plays their parts dead straight.

When broken down & analysed properly Watchers II is crap, of that there is no doubt. But for all that wrong with it, the duff looking monster & the absurd plot amongst other things I found it quite entertaining & it passed the time nicely enough. I can't recommend it I just can't but on a personal level I thought it was a worthwhile watch, the decision is yours.

Review by Scarecrow-88 [IMDB 10 August 2006] from the Internet Movie Database.