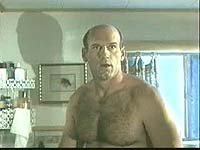 I have to say that this is one of my all-time favorite movies, and no, I am not crazy. I just have a fondness for bad movies and bad actors. This movie has it all! My 10 stars come from this:

1: A Bad Guy who's more sympathetic than the hero. I rooted for Secundus throughout the movie, he's the most interesting character of the two, Abraxas is just boring and has a really nasty skullet; is he bald or does he have a ponytail? Neither, he has both! Secundus has a cool beard and a huge scar across his face, making him look really tough! Plus he doesn't whimper and flutter around when he gets hurt like Abraxas does..especially when timetravelling through water!

3: A totally redundant cameo from a 'big name' actor. James "Jim" Belushi appearing as the seemingly VERY incompetent principal, who doesn't understand children at all. Looks like the scene was a late write-in to give Marjorie Bransfield at least one good actor to work with - that is, her own husband at the time..

4: Excruciatingly bad and misplaced music. Soft saxophone music playing when the two men are fighting?? A 'happy tune' taken straight from "Manhunter" playing during the final showdown?? This movie would work much better with 'real' movie music, or at least a heavy metal-soundtrack! Carlos Lopes must die! Or at least get fired and sued for impersonating Kenny G.

5: A cover which has almost nothing to do with the movie. Space? Universe?? It's more like a snowy forest on earth most of the time, the only things 'space-like' is the two Brad Dourif look-a-likes in a cheesy 'space-station' talking about all this weird stuff no one understands anyway.(That's a cameo by the movie's directorWriter, Damien Lee as one of them, by the way).

6: Hilariously awful dialogue. Especially from Sven, who wrote it? I don't understand some of his lines, we need a subtitled version out there! "The anti-life equation is tantamount to magic. It would make me a GOD, anything less is death!" and "Looks like they lined your skull with pla-steel" - what's THAT supposed to mean?? "Have a nice day!"

7: Flaws and plot holes by the dozen. Where did Carl, Sonias boyfriend go? Where did the UZI come from? And how come Secundus couldn't find any use for it? Why did Secundus go to a strip-club? How come he eats, and Abraxas doesn't? Did the Camper dad get his 4x4 back? Does anyone care? Why is there three narrators (Abraxas, Secundus and Sonia)? Why does Abraxas scream and flutter when he arrives in the water, when Secundus doesn't even flinch? Does a 'Life-Equation' exist as well? How did Sonia give birth to Tommy with her pants still on? How come she got pregnant just by being touched by Secundus? Where did the principal go when the school was being evacuated? How come the school-bully can have such an ugly mullet, and still look cool to the other kids? How does the answer-box know if a person contains the anti-life equation, even before the test has been run? Why do people "discorporate" when the test is being run on them? Etc etc.

8: JESSE "THE BODY" VENTURA (almost) NAKED in front of a kid! He's sitting in a bed, showing his rugged chest-wig, and talking about "two men who were once partners, and now find it very hard" etc...It was supposed to have been touching and emotional, but mostly comes out as being creepy and yet, very amusing. His box has VD, that means no touching it!

9: SVEN-OLE "SVEN" THORSEN (almost) getting an Oscar-nomination with the performance of his life! His acting in this movie is some of the best I've ever seen him do, although you can tell that he's clearly trying to rip off his old friend Arnold Schwarzenegger, to little avail. I still think he's cool though, he's the best thing that has come out of Denmark since Hans Christian Andersen. Check him out in 'The Viking Sagas' if you want to see a totally different, but almost equally big Thorsen-role - although a lot more serious. But his dialogue in this movie is the best I've ever seenheard from him, highly recommended for all Sven-Ole fans out there (I know we are a few, I am not alone!) I thought it was pretty weak that he was credited as "Sven Ole-Thorsen" in the movies end credits, which just is another piece of evidence that this movie was sloppily made by lazy people who didn't bother to do a proper job of editing! Thorsen should follow Arnold and Jesse's footsteps and become governor of some state, which would probably make this movie more famous. Or perhaps even prime minister of Denmark.. that would seriously rock!

10: The Abundance of Product Placement (more like Product Disgracement), especially by Pepsi Cola. Even though the movie supposedly was sponsored by the Coca-Cola Company? Maybe that's why Secundus destroys a bunch of Pepsi's.

I'd love to see a remake of this someday, or at least a new 'Directors Cut' with all the minor flaws corrected, and perhaps some additional footage! But what can I do but fantasize, this movie will never get it's due by others than hardcore bad movie trash-fanatics. (But we still buy the DVD's, so they better make a De Luxe version of 'Abraxas' soon!)

Review by KnatLouie from the Internet Movie Database.