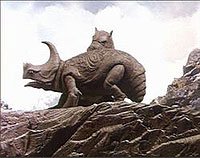 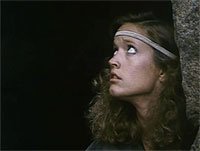 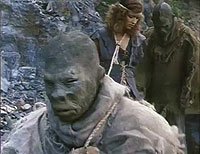 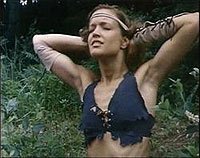 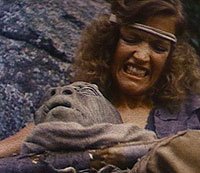 If you want to experience a fantasy world of mythical beasts and far-off lands there are several choices. Firstly you can dream it. Secondly you can read it. or thirdly you can see a movie about it, where all the imagination work is done for you with visual effects and camera work. So why on earth are there movies made which still require us to use imagination to make the images seem real, or even watchable??

I have no problem with the "B" or even "C" movie genre. Some old and very respectable movies are made using plasticine model monsters, and superimposed close-ups of real insects... not a crime, nor a problem. But in this film, even those tried and tested, basic techniques are done badly. Although, hang on, was that a cameo by the "Asteroid-millenium falcon eating-monster" from "The Empire Strikes Back"?? No, surely not!

I sometimes wonder how and why films like this ever get made. I mean, someone has to have an idea at some point, and the "story" grows from there, right? I couldn't even piece a story together out of this, the final product. So how on earth did anyone first answer the question "So, what's this film going to be about?" Initially titled "The Dark Castle" I believe... then had a name change to entice an entirely different audience. The added female voice-over at the start belies this attempt at trickery... in fact, I'm not sure that one couldn't take this film and it's packaging to the advertising standards commission, and hold the company liable for every copy sold under these false pretences.

I rated this film "2", and justify the rating thus... one point for creative use of the poem "Jabberwocky". And one point for all the laughs I got from everything in this film! And I wasn't laughing at the funny bits I assure you! So rather than try to explain what this film is... how about a little about what it isn't. It's not a parody or a spoof, this limp lettuce of a production is somebody's actual attempt to make a movie. It's not a horror... believe me, "comedy of effort" would be a better genre! And it most certainly isn't any kind of soft-core porn either... don't let that name-change fool you! All in all, shockingly bad and pointless stuff. Not for horror, fantasy, sci-fi, B-movie, c-movie, or even any-movie fans at all.

Review by devinecomic from the Internet Movie Database.