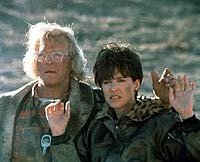 One of Rutger Hauer's better efforts. 'Sometime in the near future' it proclaims at the beginning, and then proceeds to show us a movie theatre with "Graffiti Bridge" and "Marked For Death" showing. 1990 then...(and ironically this movie also includes Basil Wallace, who featured in that Seagal spectacular as the villain Screwface, and gives an identical eye rolling performance here, sans the west indian accent). This is one of those Sci-Fi B movies that almost bridges the gap to greatness. Simple but effective concept which after a bit of a sketchy start just gets better and better, after Rutger and his 'wife' hit the road. It's helped out by having an outstanding supporting cast, including the exquisite Joan Chen, a youthful James Remar and Stephen Tobolowsky, relishing a chance to break away from comedy and play the bureaucratic villain. Poor old Rutger had a brief flirtation with stardom but he never quite made it (sigh). IMO part of the reason is that he was a bit of a lard arse and he really needed to work harder to stay in shape. Sadly he didn't and ends up looking very paunchy in this one, which is something you can get away with if your Jack Nicholson, but is never a good look for an action hero. Another is that he wasn't always able to bring his slightly unhinged "Roy Batty" charisma to his good guy roles, but part of that is due to scripting issues, as in order to deliver lines in a fruity fashion, first you must have some suitable lines to chew on.

Best of Rutger (in Engliish)

Review by seveb-25179 from the Internet Movie Database.