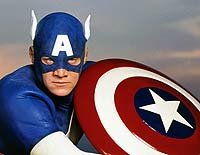 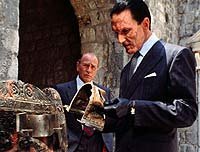 With a new "Spider-Man" movie due out this May, an upcoming sequel to "Blade," and "X-Men 2" to start filming soon, I thought it would be appropriate to review some of the previous attempts that Marvel Comics has made to get their characters onto the big screen. It's no questions that their films have never been as successful as their arch rivals, DC Comics, especially in the nineties. While there was a successful TV Incredible Hulk series in the seventies, a never-released, low-budget "Fantastic Four" flick, and an ahem film version of "The Punisher" that is not even worthy of mention, at the end of the day, the only cinematic interpretations of their heroes that are worth commenting on at all are "Blade," "X-Men," and "Captain America."

In an earlier review, written back in my naive, less-educated-in-Cinema-days, I stated that "Captain America" was the greatest super-hero film ever made. This is not a true statement, and it was one I made having not seen the film in a few years, and the flaws were less-apparent in my mind. Yes, there are many flaws in this film: Some of the dialogue is cheezy, many of the characters are underdeveloped, and there is simply not enough time spent with Captain America in costume. However, in the heart of this film there is a very sincere, very respectable tribute to the golden-age superhero, and I feel that the movie is still very much worthy of praise.

Without going too much into detail about the nature of the plot, I will say that it successfully sums up sixty years of comics into one movie. Both the characters of Captain America and his facist counterpart, the Red Skull (brainchild of Hitler in the comics, created by Mussolini and sold to the nazis here) are depicted as much more tragic than in the comics. Both characters are well-constructed and sincerely acted by Matt Salinger and Scott Paulin, and the film is basically a tribute to old 1940's serials with two strong characters taking center stage.

When I say a tribute to 1940's serials, this is exactly what I mean. Every plot point, every character save Cap and the Skull, serve nothing more than to move the story along from action scene to action scene. Many things happen that make little sense- for example, upon being revived in the nineties after being frozen in ice for fifty years, Captain America is found by a conspiracy theorist who has been piecing together his story for years. How does the guy find our hero? He just happens to be driving through Northern Canada and stumbles upon him. Once the Red Skull realizes that Cap is still alive, he determines that the hero must be out to destroy him. Now, Cap has been out of commission for fifty years, and the Red Skull is now a mysterious, Corleone-esque kingpin. In this film, they only encountered briefly in the 1940's before Cap was frozen in ice. Why on earth would Skull jump to the conclusion that hey! Cap is thawed out, and his first objective will be to stop the Red Skull? In another part, realizing that the Skull is hiding in Italy, Cap jumps on a plane fro the U.S. and flies there. Um.....how did he get on board of that plane? Surely his passport wasn't perserved with him in the ice?

But nevermind....these plot holes, and many like them, are irrelavent to what this film is trying to do: Put our hero in a series of spectacular action scenes and watch how he gets out of them. It is not trying to tell a serious story, it is simply trying to give us some silly, comic-book action in a movie-serial kind of way, and the movie does just that. Our hero is strapped to a German rocket headed toward the White House, dodges nazi villians in Northern Canada, is amazed in some cleverly-written scenes how many American products are made in former enemy lands of Japan and Germany, fights the Red Skull's henchmen in Italy, and finally has an explosive showdown with the Skull himself in the kingpin's castle, where the villian threatens to blow up all of Western Europse with an atomic bomb which he receives from a piano. All this combined with the fact that the Skull is responsible for the deaths of JFK, RFK, and Martin Luther King, and now he plans to use a brain transplant to make the new economically-aware U.S. President his slave.

It is impossible to take this film any more seriously than you would take an old serial or a four-part issue of the Cap comic book, and this kind of treatment is exactly what a Captain America movie needed. As a result, the low-budget, occasionally hammy acting, and confusing storytelling only add to the film's effect and heighten director Pyun's well-choreographed action sequences. There is just something grand and, dog-gonnit, patriotic about the President of the United States leaping from a tower in order to keep the Skull from using him in is experiments, only to be successfully caught and saved by Captain America, who is crawling up the wall vigorously. In real life, this would have ripped both their arms out of their sockets, but in this movie, what difference does it make? It's such a well-shot scene!

This said, Cap and Skull are well-developed, and they hold the film together when it threatens to go over-the-top in its comic-book silliness. Cap fights the Skull and fails to defeat him in the 1940's, only to be frozen in ice and thawed out in the nineties, where he learns that, because he failed to defeat the Skull, his arch villian is responsible for the deaths of many historic figures. Feeling he has failed his country, plus realizing his old girlfriend is now old with a family of her own, Cap is a determined, meloncholy hero with nothing to lose. There is a sincerity to the part that Matt Salinger brings, and with his niavity and his boyish-good looks, it looks as if Cap is truly a hero from the 1940's, who has stepped out of his time and into ours and is truly amazed at the changes that have come (though attempts to give him lines featuring old 40's terms such as "Gee-wizz" and "holy mackeral" don't come off so well). The Red Skull watched the slaughter of his family as a small boy in the 1930's, and this tramautizing event that led to his transformation into the monster he now is has bittered him over the centuries. In a film which emphasized overacting, he probably has the sublest role, yet he still has the film's best over-the-top lines ("Assassination isn't worth the trouble. It took two years to find Sir Hans. Three to find Oswald. The King job alone cost us over twenty two million dollars. What do we get for our troubles? Saints. Martyrs to the cause.") Must like Michael Corleone in the "Godfather 2" (though on a much smaller level), in the film's final scenes, he builds himself up as a great, powerful crimelord, but to the viewer, he simply comes across as pitiful.

In the end, "Captain America" is a fun, low-budget, patriotic, feel-good action flick which works in a Saturday Matinee sort of way. While never released to theaters here in the U.S., it made the theaters, perhaps ironically, overseas and, as a result, built the bridge for the bigger-budgeted, more-serious Marvel Superhero movies that came years later and are still to come. Certainly worth watching, certainly worth owning, certainly a tribute to sixty years of "Captain America" comic books.

Review by Tin Man-5 from the Internet Movie Database.