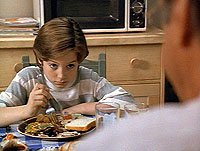 Captain Daniel McCormick is a happy-go-luck pilot who is known for his risk taken and no-strings lifestyle. As much as he wants to settle down with his longterm sweetheart, he cannot bring himself to say the words. However when she is put into a coma in a car accident and the doctors say there is no hope of recovery he goes off the deep end and decides to volunteer to be frozen in an experiment being carried out by his friend Harry Finley. 53 years later he is woken up in a military storage unit by two young boys who were just messing around. Without a clue what happened to him or what to do, Daniel turns to the two boys for help.

It sounds rather corny and obvious and, in a way, I suppose it is but by not ever playing it for laughs or being self-mocking the film creates a tone that means it all works as long as you meet it on its terms. The story is sentimental and slushy and in this way I imagine it will put many viewers off for being this way. I surprised myself by actually liking it though and finding it all rather engaging and sweet. Although I doubt he knows where Lost is going, Abrams does a good job as writer to avoid cliché and mush the best he can. Miner matches this by directing in a controlled manner that holds back on the sweeping music and emotion until he can actually use them.

The cast work well with this approach and avoid the film becoming a soapy television movie. Gibson may not have had the best of days recently PR-wise (alleged drunk-driving and alleged anti-Semitic remarks) but here he is charming and reasonably good at the emotion. Of course he could have been better considering that when he awoke after 50 years the loss of his wife would still be fresh in his mind. Curtis is solid enough and deals with the material given her. The child support are better than I expected even if they are a bit "cute" in the way all Hollywood kids are. Wood works well with Gibson, which I suppose is the important thing.

Overall this is a solid and enjoyable romantic film that is a bit slushy and melodramatic. It avoids cliché well enough but you do need to meet it on its terms and not be cynical. Not one for the die-hard action fans but it is a good date movie that is gentle and balanced enough to find a mixed audience without losing touch with the genre.