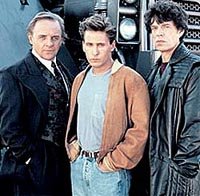 This silliness is the sort of thing that you can sit down and enjoy without having to worry about paying close attention to what you're watching. There are some great action sequences, the stars are fun to watch, and the premise, which focuses on a New York race car driver(Emilio Estevez) who is kidnapped and brought to the year 2009 so that his body can store the mind of a terminally ill billionaire (Anthony Hopkins) is silly and done without much imagination. There really isn't any cleverness or novelty to be found here, but the movie really works as mindless entertainment and is never boring.

Every member of this movie's cast fits his or her role very well (even Emilio Estevez, whom I don't typically care for), but Mick Jagger really steals the show as the bounty hunter, or "bonejacker," hired to catch Estevez after he escapes from his captors. He's never been much of an actor, and this was his first movie in twenty-one years, but he conveys an enormous amount charisma as the movie's smug villain. Another stand out cast member is Anothony Hopkins, who as usual, plays a very sophisticated bad guy and does an excellent job of it (however, it is all to clear that he was in this movie for the money alone, giving a good but very brief performance.

Although the performers give it their all, they are unfortunately not provided with a script interesting enough to help make their appearances memorable. Most of the dialog is derivative and silly. One can't very well sit down to watch a movie like this and expect a good script, but it fair to hope for some memorable one liners, and this movie really didn't offer any. Another problem I had with this movie was the fact that it was set in 2009. If your going to set a movie in a desolate future, where the majority of New York City is crime infested hell-hole, make sure the future is far enough away to seem plausible. Having a world like this seventeen years after the movie was released just seems ridiculous.

If you are in the mood for an undemanding, entertaining guilty pleasure, give this movie a look. The good performances, action, and special effects should be enough to keep you interested throughout the movie's hour and fifty minute running time, but probably won't make the movie stick with you for very long after you have finished watching it.

Review by webstergrayson from the Internet Movie Database.