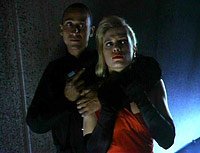 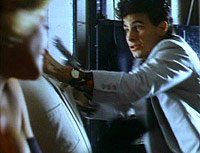 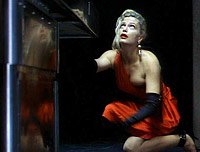 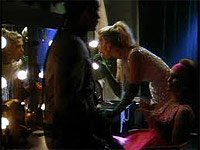 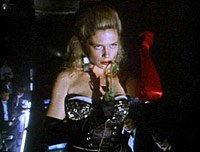 I was pleasantly surprised by this little ultra low budget sci-fi thriller, the 7ft. tall model of the NeuroVid Complex used in the film was actually a miniature used in "Dick Tracy" that art director Pam Moffat managed to borrow! It's much in the same vein as Videodrome. A young woman is drawn into a seedy underworld in the Neurovid center in the near future as she investigate the death of her sister.

NeuroVid produces erotically titillating videos for special purposes. She is dragged still deeper into this strange world to learn the ultimate secret of NeuroVid. In the NeuroVid world you literary move upwards on the floors when you as entertainer are promoted in the system and higher up the surprises are waiting. The acting is the weak spot of this chiller but Candice Daly is very sexy, great atmosphere and visuals.

Review by Macholic from the Internet Movie Database.