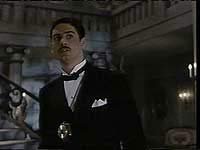 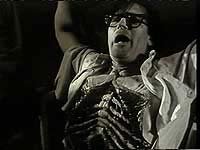 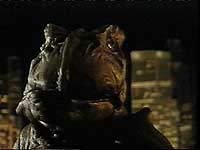 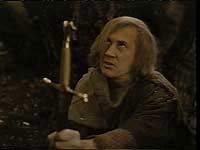 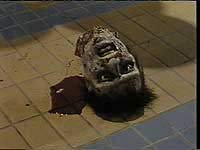 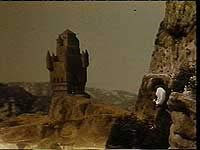 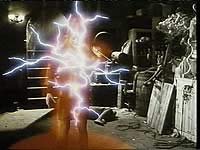 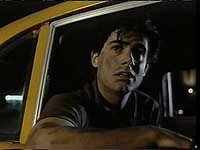 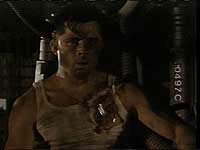 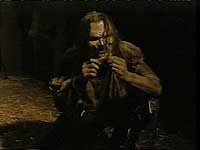 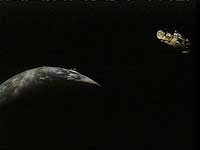 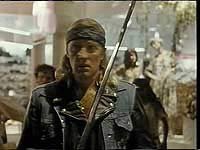 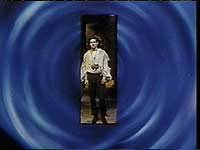 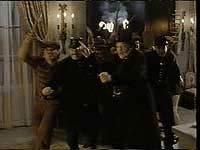 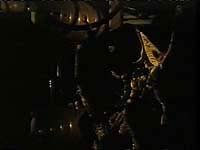 This highly disappointing follow-up to 1989's WAXWORK is more of a slapdash rehash than a sequel. The dumb and inexcusable plot sees Galligan and Schnarre going back through time for more of the same, this time to find a piece of evidence to convince a local court that Schnarre wasn't responsible for the murder of her father. Contrived isn't the right work; downright silly would be a better bet. From the first moment that this film opens, you realise the strictly low budget of the production through the poor picture quality and cheap-looking sets. It's certainly not a patch on the lively and entertaining original movie.

The first episode is a re-run of the Frankenstein story, with the creature here an unscary straggly-haired beast covered in a prosthetic face. How very '90s. Playing the mad "Baron Von Frankenstein" is none other than Martin Kemp, member of Spandau Ballet and more familiar today as a regular on the TV soap EASTENDERS. Kemp is definitely slumming it in this film, as he did for most of the early '90s, and it's highly amusing to watch him embarrass himself here. He just isn't cut out for the part, and fails to be the least bit frenzied or frightening. The only highlight of this otherwise nondescript episode comes at the schlocky end, when Kemp's eyeballs pop out followed by his brain. The ultra-cheap special effects are reviewed through the "bird's-eye view" of the brain flying through the air, as the stand on which it sits is plainly visible.

The second episode is probably the most fun, if only for the presence of comic genius and all-round good guy Bruce Campbell playing Richard Johnson's role in THE HAUNTING. The black and white photography is pleasingly different, if only copied from the first film, and there are some lame-brained yet fun slapstick moments involving Campbell being tortured in a basement. Sadly this is over far too quickly, although eagle-eyed fans may spot Marina Sirtis as the woman playing "Gloria" in the segment.

The third story is a dreadful rip-off of ALIEN, with some really bad special effects in the shape of the lame, rubbery aliens. Whoever designed these should be shot outright. Disorientating camera-work means that it's damn near impossible to see here what's going on, so the sooner its over the better. The fourth instalment is by far the longest, and thus the most boring. This time Galligan and his girlfriend are sent back to Britain in the medieval period, where they become trapped in the castle of the cruel lord Scarabis. While the plot here is passable stuff, and there are fine supporting turns from Alexander Godunov (excellently nasty as the villain, as he was in DIE HARD) and John Ireland (as King Arthur, no less) nothing much really happens aside from a few more disappointing prosthetic attempts at monsters.

It's at the end of this tale that the film suddenly picks up, and copies SHOCKER again by having two characters fighting as they jump from location to location. Thus, we get to see some fun parodies of GODZILLA, DAWN OF THE DEAD (again) and also, by far the best, one of the original NOSFERATU, which is very funny. Drew Barrymore plays a victim in the bed if you can spot her. Events conclude in a boringly unbelievable anti-climax in which it looks simply like they ran out of money.

Linking scenes of Galligan and Schnarre flying through a "time tunnel" look like they've been ripped from EVIL DEAD II, and are quite stupid. The acting from the leads is also below par, with Schnarre just another forgettable 20-something actress who doesn't register at all, and Galligan simply going through the motions of his previous successes. The appearance of many stars in cameo roles (as well as the above people, David Carradine, Patrick Macnee, Joe Don Baker, and George "Buck" Flower also pop up briefly) does give this movie a watchability, as well as some of the brief moments in which the comedy actually works. Otherwise this is a cheap and unnecessary sequel in which even the special effects are pretty bad (ie. splattery and unrealistic-looking). My recommendation is to watch the first and give this one a miss!