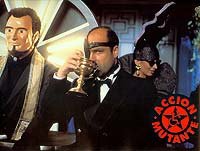 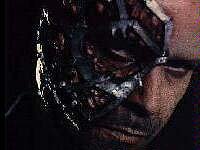 I'm a real admirer of Alex de la Iglesia's superb supernatural comedy thriller 'The Day Of The Beast', so I was really looking forward to watching 'Accion Mutante', his previous movie. It started off superbly as a exciting, violent and witty black comedy about a gang of (mostly deformed) mutant terrorists intent on destroying "the beautiful people" and their mediocre, hypocritical society. They kidnap the daughter of a bourgeois business and hold her for ransom.

Fantastic! All was going great, the balance between satire, action and silliness was handled imaginatively, but half way through the movie changes direction, and becomes increasingly less interesting. The planet where Mutant Action land to make their exchange is populated by a family of grotesques similar to one's in Philip Brophy's equally bizarre 'Body Melt', or like some of the stranger characters seen in the comics of Garth Ennis. Unfortunately for me the movie loses focus at this point, all the earlier potential for surreal social criticism is abandoned, and it becomes a standard b-grade sci fi action flick with only a few good bits.

It's a shame to me that the movie didn't continue in the approach of its first half, because I think if it did it would be a classic piece of science fiction. As it is, with all its flaws, it's still better than 90% of American SF movies made in the last 15 years, and recommended viewing. Please track down 'The Day Of The Beast' though, it's sensational!

Review by Infofreak from the Internet Movie Database.