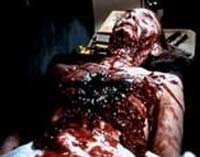 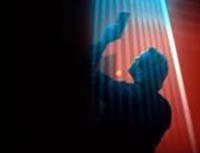 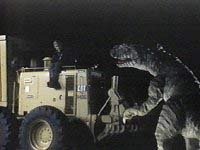 This cheap cash-in on JURASSIC PARK is, I have to say, absolutely atrocious in every way. Dispensing with an original plot, this plays more like a generic monster movie, with lots of people getting eaten and a sinister government conspiracy acting as the catalyst for all the evil. The only way to actually enjoy this movie is to laugh at it, just like I did. Take it seriously and you'll be in for a rough time. A cast of nobodies and a couple of B-movie old-timers are picked off one by one by some vicious raptor-like dinosaur. The explanation for all this is some kind of silly, confused rubbish, about genetically modifying chickens or something.

Throughout this film we see women giving birth to dinosaur eggs...Excuse me while credibility flies out of the window. Towards the end of the film the chief scientist gets to talk for 20 WHOLE MINUTES about why she's doing what she is, and it gets boring very quickly. I can't emphasise how totally dumb and mindless this film is. The leads act in stupid ways, people hang around and wait to be killed, and nobody has a very plausible death scene - instead, they all sit or stand around waiting for the dinosaurs to show up and munch on them. Some silly dialogue ("it carved him up like a Christmas turkey!") and some really annoying subtitles also help to spoil things.

The male lead, played by some non-entity going by the name of Raphael Sbarge, is totally wooden and far too young to have any authority. Diane Ladd, who plays the misguided scientist, is usually far too superior to appear in rubbish like this and looks mightily out of place. Clint Howard is wasted in a tiny role which fails to make use of his creepy talents, while only Harrison Page (A.W.O.L.) lends any credibility to the proceedings as the old-time sheriff. The best part of this film has to be the unexpected, out-of-nowhere ending which had me in stitches. Oh, and the excessive violence.

The producers obviously saw fit to add in as much unpleasant, comic book gore as they possibly could here, and the results are splashed (often vividly) across the screen. Countless non-actors and actresses are eaten by the dinosaurs, having their chests and stomachs torn open. Faces and legs are also chewed off. Other hapless souls lose their hands and arms to the monsters.

Don't watch this movie expecting any fun special effects. The dinosaurs are extremely poorly animated, some of the worst I have ever seen in fact. Forget CGI, forget stop-motion, even forget the men in rubber suits; these clunky models beat everything in terms of sheer nerve and hopelessness when it comes down to the special effects. When standing still, they look fine, but as soon as they move, the film loses it. Sometimes they're obviously being carried along just off camera. This is bad enough, but then a giant T-Rex goes on the rampage and things get worse. I'm speechless as to how poor these effects were - they have to be seen for yourself. Things made more sense as the credits rolled and I saw that half of the actors were also crew members, and it all begins to fall into place when you see that Roger Corman's production company were responsible for this outrage. It only gets an extra star for the bloody violence. This is bad, bad, bad, so please don't bother watching it!