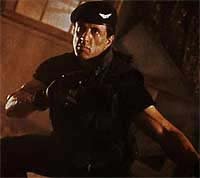 Demolition Man is one of the best sci-fi futuristic action 90's movies from Sylvester Stallone to grace on a movie screen ever. It is Rated R for non-stop action violence, and for strong language It is my personal favorite action movie of the 90's. Belongs right there with Terminator 2: Judgment Day. Sylvester Stallone is LAPD officer John Spartan the 21st century's most dangerous cop and Wesley Snipes is Simon Phoenix the 21st century's most ruthles criminal. This is a bad-ass futuristic action film it is in my top 15 favorite action films of all time. It is my personal favorite action film that is dear to my heart. I love, love, love this movie to death, it is right there with Rambo, Cobra, Hard Target, Terminator 2: Judgment Day, Hard Boiled, Predator 1 and 2 and more this is a bad-ass, kick-ass action movie of all time. They don't make em like this anymore.

"Send a maniac to catch a maniac"

It is beautiful directed by Marco Brambilla he directed excellent this perfect action movie. I don't know what happened with the director after this movie he directed Excess Baggage (1997) than a few episodes of TV series and than he dissapeard it is really a shame a lot of good directors leave like that. It has great dilogue. Sylvester Stallone as John Spartan reminds me on John Wick played by Keanu Reeves that is why Stallone and Keanu Reeves are my top two favorite action actors that I love to death. I love the lines Spartan says: "Somebody put me back in the fridge.", "You should've stayed there.", "Do you have something to say, scum bag?", "You're under arrest, Phoenix.", Most of these guys don't like their own mothers. They're bad boys." Sylvester Stallone's best performance as a renegade cop that get's framed and he must now in the future stop his old enemy Simon Phoenix who is on the loose again and is killing people. Wesley Snipes playes Simon Phoenix bad guy and barbaric ruthles killer. In my opinion Simon Phoneix is Wesley Snipes best role it is my favorite role he has done. Sylvester Stallone and Wesley Snipes were decent actors. Sandra Bullock is so sexy gorgeous hot babe as Lenina Huxley even now day Sandra is still my favorite actress and I still love her. For the rest of the cast I don't care.

With innocent victims caught in the crossfire in Los Angeles' intensifying war on crime, both cop John Spartan (Sylvester Stallone) and violent thug Simon Phoenix (Wesley Snipes) are sentenced to a state of frozen incarceration known as "CryoPrison." When Spartan is finally thawed 36 years later, it's 2032, and Los Angeles is now a pacifist utopia called San Angeles. But with Phoenix again on the loose, Spartan must team up with future cop Lenina Huxley (Sandra Bullock) to apprehend the killer.

The action scenes are great, they are well done even for CGI effects they are practical and they are real stunts. Here you have Stallone with two Beretta 92F handguns jumping in his two arms shooting at Simon Phoenix. That is bad-ass action well done scene. The CryoPrison scenes are well done, the future is a bad-ass. I did hear hear that people are complaining that it has humor and song fests in it that it is an awful movie. I disagree, it is a satire, so what. RoboCop, Total Recall and Starship Troopers have satires in it, but they are good movies and get's better credits but Demolition Man dosen't get better reputation I disagree.

I love the opening sequence in which Spartan (Stallone) bungee jumps onto the roof of Phoenix' headquarters and fights his way through the structure, defeating several of Phoenix' guards. When Phoenix (Snipes) sees Spartan's approach on his security cameras, he grabs a dagger and punctures several barrels of gasoline, spilling it onto the floor. Spartan arrives and orders Phoenix to reveal the location of the hostages. Phoenix catches Spartan off guard, showing him the pool of gas and brandishing a lit torch. He defiantly refuses to give up the hostages and flicks a lit cigarette toward Spartan, igniting the gas. Spartan grabs Phoenix and runs out of the building while the flames ignite several barrels of C4 explosive. The building collapses just after Spartan makes it to safety. The building explodes that's was practical done, practical effect real explosion. Why can't they demolish a buliding like that today? The opening action scene is a bad-ass Spartan fights Phoenix gangs and fights off with Phoenix the only one who catches the most dangerous killer.

The car chases are excellent dangerous well done: Phoenix steals a SAPD squad car and flees, Spartan and Huxley with an antique 1970 Oldsmobile 442 goes after Phoenix. During the chase, Phoenix tells Spartan that he'd already killed all the bus passengers in 1996. That is a real practical action stunt done. I love the night scenes more in here, this is really my favorite scene in the film. Spartan grabs Phoenix and throws him out of the car like he used judo grab to kick Phoenix out of the car. Spartan try's to stop the car but he flys in SLPD structure.

I love how the future is done in this movie, how they build the town the Taco Bell and so on. I love that Spartan goes alone after Phoenix because Spartan knows he has to stop Phoenix from releasing cryo prisoners 80 killers. This is my movie, my action movie I don't care about the satire, or funny lines. Not every action movie has to be brutal.

I am sorry I review this movie twice I hope I want get band again I love this movie to death. It come out in year 1993 Stallone was still in his best shape, he was strong and muscular. Cliffhanger was the first movie that come out before this movie. Jurassic Park and Hard Target come out the same and yes they are my favorite movies. I watch them all time, no not all the time but every year I visit them. Jean-Claude Van Damme and Steven Seagal were offered lead roles in the film for John Spartan, but both turned it down I am glad they did. Jean-Claude Van Damme is Hard Target - Chance Boudreaux for me not John Spartan that is Sylvester Stallone. The role of Phoenix was also offered to Jackie Chan, but he turned it down, not wanting to play a villainous character. I am glad he did Jackie Chan would be terrible and not believable in the lead role. Lori Petty was originally cast as Huxley, but was replaced by a then relatively unknown Sandra Bullock after two days of filming due to what producer Joel Silver described as "creative differences". I am glad Sandra Bullock was in here Lory Petty would be terrible.

I love the music score from Elliot Goldenthal the same score was later used in Batman Forever (1995), the same theme. I love Demolition Man soundtrack by Sting the music played on the end of the credits.

Demolition Man is the best sci-fi futuristic 90's action movie from Sylvester Stallone to grace on a movie screen ever! I love this movie to deathI love it so much it is dear to my heart. John Spartan is my favorite charather ever played by Sly. This is my movie my action movie it means everything to me.

Review by NightmareOnElmStreetFan from the Internet Movie Database.

At The Cinema Featurette
4:34