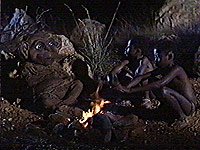 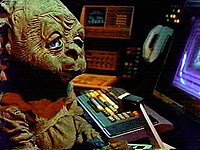 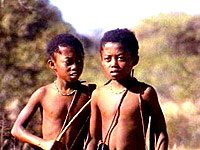 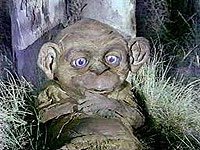 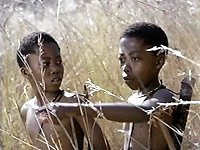 WOW! That's the only word to describe this movie... Wow. It's not Monster A Go Go bad (nobody can work those kind of miracles) but it almost certainly is Night Of Horror bad. I haven't seen such a lazily put together film. Usually I can point out some kind of redeeming feature with films that can usually make me say "It wasn't good but at least this was going on"... With THIS. No, no, no, no, no, no, no, no, no, NO! NO!! NO!!! NO!!!! NO!!!!! What is the plot of this movie you may ask? Nukie and Miko are 2 aliens that have powers which the extent is yet to be revealed. They fly to Earth (not even in a spaceship I really mean flying... like Superman) and Miko lands in America and Nukie lands in Africa. Miko is captured by the United States Military. It's up to Nukie to find his brother on the other side of the planet ON FOOT.

That's one of the biggest problems I have with this movie, Nukie can fly! It's established all throughout this movie and he doesn't use it? This is like trying to find an answer to a question with hours upon hours of research when the answer really is really in a book, circled and has arrows pointing to it. TAKE ADVANTAGE OF WHAT YOU HAVE.

Not to mention that the puppetry of Nukie and Miko are by far some of the worst puppets I have EVER SEEN. Even the puppets you'd pay $5 for your kids to see would be better. Why? If they needed to blink, they'll blink. If they needed to open their mouths, they'll open their mouths. With these puppets they couldn't get it to blink in synchronisation and in the 40 minutes I did see of this movie they only move their mouths ONCE.

I also have one question. Is this an alien movie or a talking animals movie? I thought it was an alien movie at first but he comes across some talking monkeys and they communicate with him. Is this the ultimate "Okay, we're not making a good movie so lets just shoe-horn this crap in." It wouldn't surprise me but... huh.

Also I said I only watched the first 40 minutes, let me just some up half of the dialogue of that time "NUKIE" "MIKO". Not to mention that there are 7 times (I counted) where a man who we never see tells us exposition. Some within the same minute.

The Miko scenes also are a really big drag to watch. Let me sum up all of them that I have seen. Miko gets experimented on, screams out "NUKIE" and cut to the next scene.

I know I also bring up Nukie not taking advantage of what he has but neither does Miko. In the only other scene that isn't what I described above he goes into the room with a super computer so you'll think this is his escape right... WRONG! He hacks into the computer in the strangest way possible, without ANY guards and goes back on the table to sleep... HE IS ALMOST DYING WHY DOESN'T HE JUST WALK OUT THE FRONT DOOR, THERE CLEARLY ARE NO GUARDS THERE.

So... Wow really is all I can say about this movie. I didn't even talk about the racial insensitivity they portray Africans in this movie but thankfully this movie clearly gives me an almost disruption of the 1000 word limit when I'm pointing out the problems. I can actually see a premise like this working. I'm not even kidding I can see the whole idea of "alien loses his family and goes on a journey to recover them." BUT when the aliens don't take advantage of what they've been given then I can't like it, even if the puppet could movie it's mouth I still wouldn't like it.

Review by WakenPayne from the Internet Movie Database.