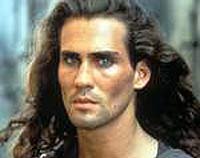 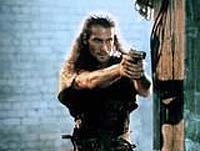 I'd be surprised if the makers of the - kind of weirdly-titled - 'American Cyborg: Steel Warrior' hadn't recently watched one or more of the 'Terminator' movies (the early ones, anyway) before they came up with the idea for this sci-fi movie. It's like they took the plot of the first 'Terminator' film and set it in one of those creepy, dark, depressing future scenes that occasionally popped up in Reece's flashback stories.

Sadly, despite 'Terminator' being a bit of a 'B-movie' when it was first released and not having that much of a budget, 'American Cyborg' appears to have even less money to spend on everything from actors to effects. But is it bad? Well, no one's going to say it's amazing, but anyone who can squeeze any enjoyment from this film will probably admit that it's one of those 'so-bad-it's-good' type movies.

After a nuclear holocaust caused by the machines (yes, this is the plot of 'American Cyborg, not 'Terminator' in case you were wondering) the humans now live in cities in near starvation. However, instead of the robot AI just deciding to wipe them out, they just kind of let them mill around because all humans are now sterile due to the radiation in the atmosphere. They'll soon die out, so the machines just kind of let them be. That's until a secret lab manages to produce an embryo from a fertile woman. Now she has to get her child (albeit in a large test tube!) across the city to a boat where it will be taken to Europe and save the world - somehow. Maybe evil artificial intelligence doesn't like Europeans and won't go there?

Luckily, she's aided in her quest by a guy that kind of looks like a discount Nicholas Cage impersonator with long hair (think how he looked in 'Con Air'). This was made in 1993 when Cage was actually hot property. I wonder if it was made now whether the film-makers could get him to actually star in it? And the pair of them are pursued by a 'Terminator-like' killer cyborg who is pretty much unstoppable until the final act when the film's due to end. It's all pretty by the numbers. The lack of budget means the effects aren't that good, but passable. The acting is okay - not terrible, but it's no wonder you probably won't have seen any of these actors in much else. The action scenes are directed about as competently as you'd expect from a low budget nineties action movie and everything is pretty run-of-the-mill.

I did wonder whether it knew it was a bit of a cheesy B-movie and if it would actually play to this strength, but it seemed to play it serious all the way. There was about one moment when the hero did something kind of comical which would have worked better in some form of parody, but that was about the only moment of humour. The rest was all played straight.

I stuck with it until the end and I didn't think it was a complete waste of an hour and a half of my life, but I'm not sure I'd bother watching it again. If I want a serious story like this I'll stick with the 'Terminator' franchise and there are tonnes of movies even more daft that are fun to watch ironically. And was it just me or did the end music remind me of a 'Terminator' style opening theme?

Review by bowmanblue from the Internet Movie Database.