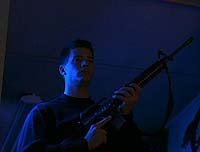 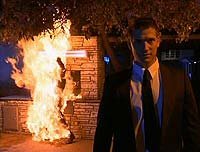 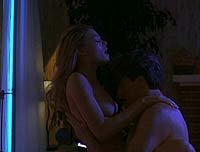 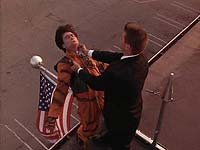 I first saw Sasha Mitchell as Cody in Step by Step. He was the main reason to watch that show. Then he got into some family trouble in which he was later cleared of wrong doing. Caitlin Dulany caught my eye when I watched her in Maniac Cop 3. I thought she was hot and I thought she did a great job.

So when I saw this film come out and saw the two stars, I knew it could not let me down. Sasha plays a cyborg Substitute teacher who goes around to different schools and kills the scum causing problems. Caitlin plays a teacher who is about to testify against a student who killed another student. Everyone is against her except Sasha, who tells her to testify. Even her boyfriend, played by Nick Cassavetes, is not totally behind her. Rick Hill plays a government agent whose job is to locate any living cyborg and kill them.

Caitlin goes out for a jog in skin tight gray sweats. She looks great. The gang she is to testify against nearly rapes her until Sasha comes to the rescue. He lets her borrow a book he has that basically helps him with his cause. Later that night, he kills some of the gang in a very calm manner. After that, he goes to peep at Caitlin thru her window. She is wearing skin tight panties and a tight tee shirt. What a woman! Her boyfriend goes out to scare the gang a little bit. He is blamed for the killing that Sasha did the night before. He is let go after he has an alibi. Sasha goes to see Caitlin and does not like how she is not sure anymore about what she is doing. He is about to kill her when the gang drives by and he ends up saving her.

Nick arrives and makes loves to Caitlin. Sasha is outside as they get into it. Caitlin looks great naked and making love. There are some nice shots of her breasts as she rides him. The film cut back and forth from the love scene to Sasha getting upset and shooting guns off in a room. The next day the school has a paint ball game. This is a great set up because the gang is going to kill Caitlin and make it look like an accident and Sasha is out to kill all the scum. The government man shows up and tells Sasha he wants to copy him and not kill him. He kills Rick and continues with his mission. He kills the gang and then he is shot when he attacks Caitlin. Nick kills the last gang member as he is about to kill Caitlin. Sasha shows up and tries to kill them both. Then the government agent, thought dead, shows up to tell everyone that Sasha is not a cyborg, but the son of the scientist who invented the cyborgs. He just went a little nuts. He decides to kill himself and Caitlin. She talks him out of it when she recites her mission from the books he lent her. She shoots him dead. The final scene shows Caitlin wearing body amour just like Sasha wore. It appears like she will become the new killer to keeps the kids in line.

Review by w22nuschler from the Internet Movie Database.