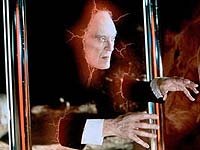 These spherical objects that The Tall Man creates in the "Phantasm" series are truly quite amazing. They have the ability to hover in the air, move at rapid speeds, view their surroundings with a heat-sensitive POV, and detach various objects that can bore through their victims' skulls. In "Phantasm III: Lord of the Dead," we learn that there are thousands of these balls, and it made me wonder how The Tall Man has so much time to construct them, in between robbing graveyards, dissecting bodies, creating evil dwarves and driving across the country in pursuit of new towns to ruin. Sure, we now learn that he places dead people's brains inside the objects, but where does he craft these spheres? What are they made out of? How does he make them perfectly round? How are they able to hover in the air? How do the brains inside them function?

No matter. Because "Phantasm III" is almost so bad that it's good. Almost. Unlike the second film, this one seems a bit campier, providing darker humor and less sequences of cornball dialogue. It's still terrible but not in a boasting sort of way. And the movie does a good thing by focusing on Reggie (Reggie Bannister) instead of Mike (A. Michael Baldwin). And is it just coincidence that the actors' names relate to their characters? Nope. "Phantasm" is one of the all-time low-budget family-oriented series. And when I say "family-oriented," I don't mean it's targeted at families with children -- I mean the "Phantasm" family, the fans of the series. Because the entire way these movies are constructed are to entertain the die-hard fans. Just like the "Critters" series, "Phantasm" falls back on flashbacks, recurring characters, movie in-jokes that reference earlier sequels, and familiar gimmicks (such as the endings). It's a true cult movie.

So the more you watch these films, the more you are guaranteed to enjoy them. But they're still terrible and very silly -- I can't imagine how so many sequels got made. Did they really make that much money?

Taking place directly after "Phantasm II," this film has Reggie joining up with Tim (Kevin Connors), an orphaned child, to help find Mike (now played by the original A. Michael Baldwin, who took a hiatus during the 80s to pursue spiritual enlightenment). With the help of old and new friends, Reggie finds himself face-to-face with The Tall Man and another dimension, where he finds Mike trapped and unable to escape.

Hunky 80s teen icon James Le Gros (well, he was popular in Japan) looks absolutely nothing like puny A. Michael Baldwin (the original Mike from "Phantasm"), and after seeing "Phantasm II," it seems as though Coscarelli has downgraded his hero. He wisely focuses attention on Reggie, instead, and Baldwin is introduced for the first time about halfway through the movie. I have nothing against Baldwin, and he was the original Mike after all, but he's completely different from Le Gros -- awkward, strange, silent, and boring. He's not a very good actor and he's not a very convincing hero. And because Le Gros and Baldwin are so very different, it's hard to remind yourself that they are supposed to be the same characters. I wouldn't even buy them as brothers. What's great about James Bond is that even after he changes images, his missions start fresh, so we don't feel a need to remind ourselves that Pierce Brosnan is supposed to "technically" be the same guy that Connery played. With a new look comes a new plot. But with "Phantasm III," the plot is the same, and the flashbacks are present, which is often times quite confusing.

The film likes to blend in humor, mostly the sexual kind. This time around, the ever-horny Reggie is now on a quest to get black chick Rocky into the sack ("Ever tried vanilla?" he asks her. "Didn't I tell you? Dairy products give me gas."). So let's get this straight: his wife and kid die, and two days later he's trying to get laid? Hmm...

Reggie is the best character in the film, but as the sequels tread on, he looks increasingly tired and too old for it all. It seems as if Coscarelli decided to make a horror movie one day, and enlisted the aid of his friends to help him film the movie. Now, they've all outgrown the movies, but they're still making them. They should just stop. "Part V" is going into production soon. Why?

It's hard to actually classify "Phantasm III" as a movie because it seems more like a home video project made on a low budget with a bunch of pals. The special effects are a great deal better than those in the first two, but a movie cannot be judged solely on its effects. As a horror film, "Phantasm III" isn't very scary at all, and as a comedy, it is only mildly amusing.

I'll admit that I was entertained, to a certain extent, and that it seemed a bit better than "Phantasm II," which I think tried a bit too hard to become something more than an independent horror film. But if you actually stop and consider the flaws of "Phantasm III," they're way too enormous to pass over.

Once again, Coscarelli uses an unexpectedly good and surprisingly lasting finale to close his motion picture. But the fact is that "Phantasm III" just doesn't make much sense at all, promising to reveal certain things when it only extends our confusion about them. And like those frustrating "Matrix" sequels, it ends with a tie-in for another installment; a cheap way of getting audiences to see the next film. And also like the "Matrix" sequels, it tries to answer too many questions about too many open plot holes, when all the audience wants is an exit door.

Review by MovieAddict2014 from the Internet Movie Database.