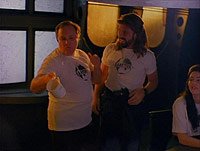 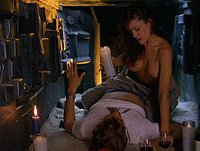 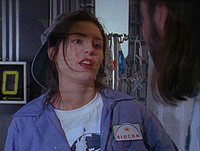 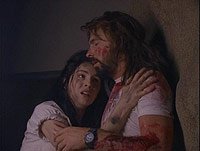 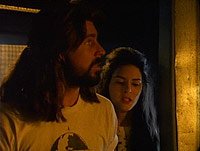 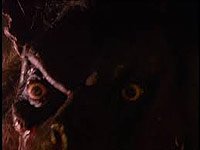 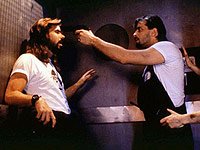 Patently predictable and lame sci-fi horror thriller, the umpteenth variation on the familiar "Alien" story. (But hey, at least they're up front about what they're ripping off.) A sextet of scientists work deep underground (five miles beneath the earth, to be exact), not knowing the full extent of what their work entails. It seems that the twisted, eccentric genius in their midst, Newton (Kevin Alber), is doing - you guessed it - cutting edge genetic experimentation, from which he hopes to profit big time.

"Alien Terminator" is a yawn-inducing example of the "same old, same old" when it comes to this kind of genre storytelling. The filmmaking isn't so incompetent, or cheap, that it makes one laugh, unfortunately. It's just boring. Everything about is is just barely adequate, without the redeeming nature of unintended chuckles. It's too hard to care about this tale, or about its characters. The actors aren't unlikable, but their characters are just inane. The incredibly sexy Maria Ford offers some fun playing a tough talking, Ellen Ripley style action babe. The most endearing guy is the doctor, ironically named "Coach" (Bob McFarland), who disappears from the story too soon. Alber is very annoying playing the greedy oddball with the hidden agenda. And yes, folks, since this is a production of Roger Cormans' New Concorde company, you can expect a dose of sex and partial nudity.

It's hard to imagine even die hard aficionados of this variety of entertainment being quite enthused by this one.