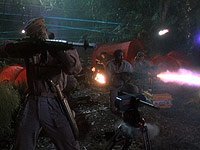 Congo is the first movie on the IMDB for which I am writing a user comment. I am giving it this distinction because, although it is not the best movie I have ever seen, nor my all-time favorite movie, it is one of my personal favorites nonetheless. If I could choose only ten movies to own, or even just five, Congo would be one of them.

Because so many people dislike Congo, or are at least indifferent to it, I feel compelled to explain why I like it. I like Congo because it's different: in the seven years since I first saw it in June of 1995, I've seen countless other movies, but Congo still retains its uniqueness, I believe. Other movies have tried to duplicate Congo's juvenile sense of adventure and tongue-in-cheek humor (most notably the two Mummy movies), but none of them have surpassed Congo as one of the most gleefully preposterous and deliriously fun yarns I've ever seen.

So many people have criticized Congo in so many ways that I'm not sure which complaint I should address first. The consensus among most comments seems to be that the character of Amy, the "talking" gorilla, pretty much ruins the movie because she is annoying and unconvincing. Although I cannot deny that "Amy" is, indeed, a woman in a gorilla costume which is not quite convincing, I should also say (1) that when I first saw Congo, I thought Amy was pretty convincing, and at least acceptable; and (2) convincing gorillas in movies are rare, in my opinion. Rick Baker's work in Gorillas in the Mist and the Mighty Joe Young remake is the best I've seen; and although Amy (created by Stan Winston's team, not Baker's) is inferior to Baker's best work, she's better than some of Baker's apes in Burton's terrible Planet of the Apes remake. If I must choose between Amy, and Tim Roth in an obvious chimpanzee costume, I choose Amy.

Another common complaint is that the movie Congo is inferior to Michael Crichton's novel, upon which it was based. I read the novel in early 1995, just prior to seeing the movie, and so the book was still fresh in my mind when I saw the movie: and I thought the movie did an excellent job of conveying the essence of the book, and gave the story an offbeat style which sets the movie apart from the book. The movie also has a healthy sense of humor about itself, which Crichton's novel lacks and sorely needs.

I almost forgot the actors! Some people hate Congo simply because it lacks a Mel Gibson or Bruce Willis; nevertheless it does boast a talented and interesting cast of mostly underrated actors. Laura Linney has given good, strong performances in many movies, but I argue that her performance in Congo is still her most entertaining. Dylan Walsh gives an earnest, appealing performance as the earnest, appealing Peter Elliot, whose devotion to Amy (however laughable it is for many viewers) gives the movie some heart. Ernie Hudson gives a clever, unforgettable performance as Munro Kelly; although black, he possesses the mannered speech and condescending attitude of an authentic "great white hunter," one of the movie's best gags. Grant Heslov has little to do, but some of his delivery is terrific ("Safari? I don't even like picnics!") Tim Curry is a sheer delight in this movie, giving a campy performance as the monomaniacal Herkermer Homolka, a "Roumanian philanthropist" obviously written into the movie (the character does not exist in the novel) to correspond with Wayne Knight's character Dennis Nedry in Jurassic Park. Some people are offended by Curry's performance, and believe it's offensive to Roumanians as well. Here's a tip: anyone offended by anything in Congo takes life (not to mention this movie) way too seriously, and needs to lighten up.

Many people hate Congo simply because it's cheesy. But considering the story (assorted oddballs journey to a site in the African jungle which may be the legendary mines of King Solomon), how could the movie not be cheesy? Did people really expect a movie called Congo to be realistic, believable and compelling? Surely such a movie would be even more cliched and misconceived than the one that was made. John Patrick Shanley's script may be crude and smug, but at least it's fun, and certainly a model of efficiency: Shanley trimmed the novel of subplots (such as a rival expedition, and attempts to decipher the gray gorillas' "language") which would have made the movie longer, slower and more pretentious. He added lots of pithy dialogue and made the whole affair an exercise in high camp. The result is a quintessential juvenile adventure that improves upon more bombastic and elaborate efforts like Armageddon. And Frank Marshall's straightforward, low-key direction nicely contrasts with the inherent absurdity of the storyline; a more intense and heavy-handed director would not have been a good choice to helm a movie like Congo.

Congo isn't nearly the terrible movie that many people believe it is. It isn't a movie for everybody or even a movie for most people: but it was created with a certain audience in mind, and many people are simply too serious and high-minded to belong to that audience. Congo and movies like it are cartoons for adults: if you don't like movies with colorful visuals, ridiculous plots and juvenile characters, you should not watch Congo. But if you do like movies with those characteristics, then I submit that Congo is one of the best movies of that kind that I've ever seen.

Review by PhilipJames1980 from the Internet Movie Database.