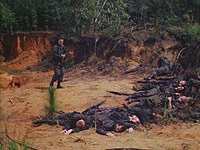 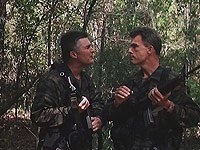 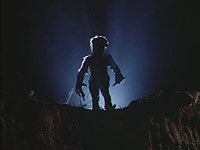 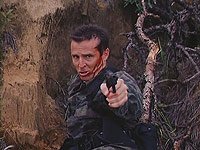 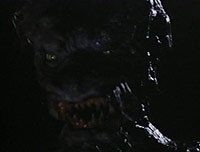 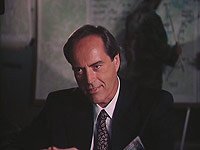 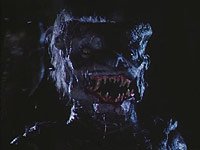 Does anybody know that this movie stars Wilford Brimley (Dr. Blair from John Carpenter's THE THING)? I for one had no idea and it was fun seeing him again on my TV-screen. But don't watch this movie only because he's in it. He has limited screen time and absolutely nothing to do but sit around and do some talking, playing a veteran general. I'm gonna use one of his memorable quotes (he does have some good lines in this movie) to describe the plot:

"A biological weapon, so nasty we had to send it to the moon, crashes out here in the forest and we don't have any idea what's going on."

If I add the term 'B-horrorsci-fi drivel' than you must know what you're in for. The bio-weapon itself is some kind of red liquid virus containing a mixture of the most aggressive humananimal-dna available. So when the shuttle with the canister containing the virus crashes in the woods, a team of soldiers is send in to retrieve it.

I really chuckled myself through this movie. The dialogues are full of clichés and there's even a one-liner which is shamelessly stolen from John Carpenter's THEY LIVE including the words "kick ass" and "bubblegum" (need I say more?). Leo Rossi over-acts it beautifully, at one point (when he discovers his enhanced hearing-abilities) even pulling dramatical funny faces of which Bruce Campbell would be jealous. He also warns his team up to three times to NOT touch the canister when they find it. And when they do find it, what does he do? He immediately picks the darn thing up with his bare hands (thus getting himself infected). So he starts mutating (I love the pulsating skin-effects) into this man in a laughable monster-suit with an over-sized head featuring some crappy animatronics. The rest of the movie has the sole survivor of the team and the mutant chasing each other in the woods. Along the way a special forces team is sent in but immediately gets ripped to shreds without being able to do anything (in case you didn't know, this always happens to highly trained special forces in this type of movies).

There are also some intercut scenes featuring Powers Boothe (talking with Brimley). Now good ol' Boothieboy seems to realize that he's starring in a crappy movie and you can tell that he doesn't mind doing so, having fun in delivering his mean pun-filled lines.

The ending is completely ridiculous. Never have I seen a monster get killed this way in a movie. Trotter (the one survivor) simply reasons it to death. He gives this speech about them being soldiers once who are not supposed to kill innocent human beings. The monster seems to realize that while making a weeping sound (sounding like a dog being sad). They friggin' salute each other!!! And the monster blows itself up. I gotta hand it to the script-writers, even I couldn't have come up with that one.

At first I was convinced that the film-makers intended it to be a tongue-in-cheek B-movie, but there's one detail that tells us otherwise: the musical score by William T. Stromberg. It's too ambitious. It is fairly good but hearing it in this kind of movie makes you roll your eyes and sigh.

Now, I must admit I've seen this movie twice (oops!) and I did have some fun with it, but I think the wisest thing to do is put this movie in a canister and send it to the moon.