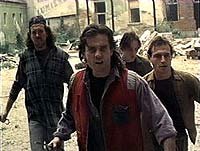 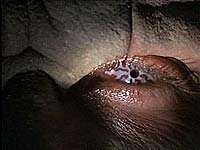 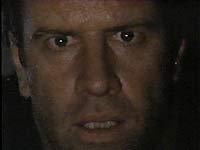 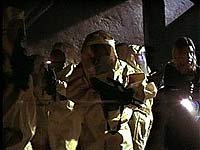 The first thing you'll notice about Adrenalin is that it all appears to have been filmed in a few scabby streets just behind the director's back garden. He probably thinks this looks authentic. It doesn't. It looks tragic. The entire film consists of Chris, 'Tash and a couple of other disposable rentacops legging it from one end of a street to the other and back again, popping into disintegrating buildings here and there along the way so that bits of it can fall on them, and occasionally pausing at either end of the street for a random shoot-out andor for someone to get eaten by the startlingly unscary maniac they're supposed to be chasing. It must have taken such a great effort on behalf of all involved to keep the production values so consistently low that it somehow seems deserving of applause.

Ms. Henstridge, predictably, has very little to do except look scared, not manage to shoot anything and almost die every so often, while the inestimable Mr. Lambert seems to be here for no other reason than to get shot loads. It speaks volumes that he doesn't even attempt to rescue the film by interjecting his endearing trademark cackle into the dialogue at key moments. Not that he'd get much chance anyway: nobody really says anything but "Yowch, aargh, shoot him, he's eating me, aargh, oh no we're trapped, yowch, shoot him, aargh, my leg's fallen off."

The plot's some tosh about a plague having wiped out most of humanity, again, and towards the end of the film the wonderful scriptwriter comes up with the idea of having some Virus Control people turn up, mumble something about this killer they're chasing actually being the carrier of a new and far more deadly strain, then go away again and leave everyone to carry on getting shot. Everyone, that is, except for the people stuck with the job of writing up the box blurb, who seize this precious jewel of hope from the pigsty of horribleness and nurture it as if it were their own rancid offspring.

Adrenalin, then. It's one of the most boring films I've ever seen, which, for something that bills itself as a sci-fi horror thriller, isn't very good really.

Review by Leigh Loveday from the Internet Movie Database.