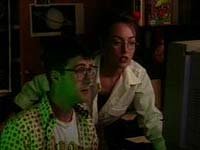 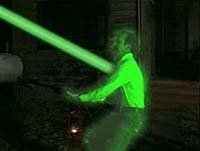 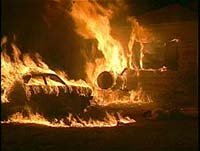 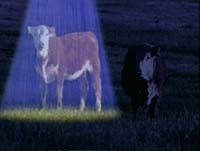 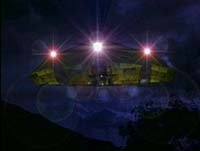 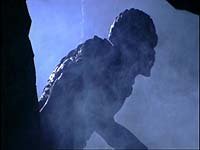 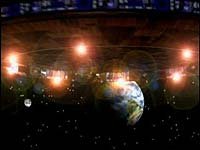 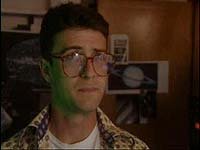 Surprisingly, a number of things came to mind while watching ALIEN SPECIES, Peter Maris' empty skulled direct to video ripoff of the equally idiotic INDEPENDENCE DAY, mostly because the film is so vapidly uninteresting that it served as an opportunity to engage in free-form speculation for ninety minutes while things got blown up while bathed in fluorescent green lights:

1) I am in awe of Charles Napier. He may not be as endearingly grandfatherish in appearance as Peter Cushing or have a spry, mischievous old coot thing going on like John Carradine. But like those two legends Napier has made a career out of making the ridiculous seem perfectly ordinary. Usually he is cast as a cop or military officer who always has that glint in his eye that says he knows more than he is letting on, playing the fool to keep everyone at arm's length. My favorite Charles Napier scene is from Fred Olen Ray's DEEP SPACE where he dons a Scotsman's kilt and takes up the bagpipes after an intimate dinner. His date asks "What, is that supposed to make me want to sing or something?" to which Napier matter of factly replies "No, it's supposed to make you want to take your clothes off." She does.

2) The "hero" in this movie comes across as a dirtbag who has a haircut that makes him look like at least two of The Red Hot Chili Peppers. Which two I am not certain since they usually only wear socks and their underpants on-stage, and as such I have never really gotten a good look at them.

3) Actress Jodi Seronick Golden is indeed the best thing about this film: She is spunky and speaks with excellent enunciation, looks great splattered with alien blood while running around in a torn business suit and has a cute little nose. She deserves better than this.

4) I do not miss Will Smith at all (in fact, there are only white folk in this ID4 ripoff, which sort of misses the point why that giant bag of hot air actually kind of worked: We are ALL doomed, not just the white suburban punks & techno nerds) but the film could use an appearance by Brent Spiner without his "Data" makeup on. Without that white pancake base and ping pong ball contacts, he looks creepy.

5) The kook 911 Truth theory idiots have nothing on the whacked out techno paranoia conspiracy allegations spouted by homogeneous white suburbanite nerds in this baby. Maybe if they didn't look like members of Garbage or Curve I could take it more seriously... Actually, no, I couldn't.

6) Computer grapics animation & special effects should only be made by people who's work does not look like it was recorded from a video game. It is one thing to make a movie that inspires or resembles a video game, but to get the process backwards requires such a willingness to look like such a moron that it us unacceptable.

7) Usually I praise a film with the audacity to ignore any kind of "suspension of disbelief", has no remorse about it's ultra-low budget and sticks to it's subject matter without ever look up from the gutter once. The problem here is that this film is pilfering global threat topics and doesn't have the good sense of a movie like ZONTAR, THING FROM VENUS to just have people sitting around and talking about it. By trying to show us instead the movie crosses the line from just being vapid & amateurish to having the gall to think it would be able to hold a candle to the sight of John Agar sitting on a Naugahyde couch looking concerned as the deaths of thousands are described to him.

8) The movie appears to have been intended to be the first part in a two-installment story, with no mention of whether or not part 2 was ever executed. My suspicion is that somebody had their Powermac taken away.

9) The film seems unsure at times if it is a parody or just a low budget ripoff, resulting in the film's most interesting scenes. You aren't sure if you are supposed to be laughing at the idiocy or poking your friends in the ribs to make sure they get the joke too. It is a disorienting viewing experience: Are we supposed to be taking this seriously? I hope not, but if so, what was the point of it?

10) The film has an affection for colored neon lighting that is used as a substitute for atmosphere. To be frank, the most unnerving scenes were ones set inside of a car with the principal characters attempting to have a conversation. It was like listening to a bad "X-Files" episode, which amazingly is referred to in dialog in what may be a rare instance of the film's self awareness showing.

11) At one point during a moment of crisis inside of the abandoned warehouse level from "Half-Life", one of the characters sweeps the area with his shotgun, at one point aiming it directly at the pretty head of Jodi Seronick Golden. Good thing it wasn't really loaded and they weren't really being attacked by space aliens or she would have been toast.

ALIEN SPECIES can be found on a new 50 movie12 DVD box set called NIGHTMARE WOLRDS. It can be found there, but just why you'd go looking for it is a matter for you to decide.