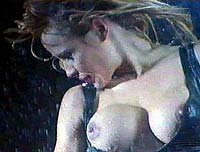 I remember Pamela Anderson when she was on the TV show "Baywatch." I don't remember if she was one of the main characters on the show but she is in "Barb Wire" and it's a pathetic excuse for Pamela's huge boobs and wedged ass in almost every shot.

It's about a hot to trot bounty hunter, Barbera Wire (Pamela Anderson), who runs a bar called Hammerhead in "Steel Harbor," set during the "Second American Civil War." At night time, she is a mercenary for extra cash. She gets wind that, Chief of Police Willis (Xander Berkeley) is looking for a fugitive, Dr. Corrina Devonshire (Victoria Rowell) who has information about a biological weapon being developed by a corrupt, Colonel Pryzer (Steve Railsback). Her former lover, Axel (Temuera Morrison) shows up at the bar asking Barb to help him and the Dr. find a pair of special contact lenses that will allow Corrina to evade into Canada so she can blow the whistle on the Colonel. Everything goes wrong and Barb swings into action to save the day.

I had a real hard time following this film and I actually forget the first act when the second act kicked in. It's awfully confusing and jumps from more things that it can't handle. It feels like they took a bunch of ideas and just jammed them into the picture to attempt to tell a story and it doesn't work. I had to go back and read, just to remember what happen in the first act and to attempt to figure out what the plot was. It opens with Barb stripping on a pole while she is being sprayed in slow motion to the opening credits. This should come as no surprise for an opening.

There are a lot of similarities here to the 1942 Classic "Casablanca." It takes place in the year 2017 where the city is in the middle of a war and there is something about HIV in there that is used to wipe something out. Anyway, Barb lives in the last free city on earth and her headquarters for all her business is the nightclub. This is one of the major locations in the film. I also discovered that Barb is inspired by a comic book character. I should have known that just from looking at the release poster. Barb is suited up in leather and rides a motorcycle in the first act where she poses as a hooker and attempts to trick some loser into a good time to gain access so she can rescue a hostage only to shoot her way out of the apartment building. There are a lot of science-fiction looking gadgets and gizmos in the film that look cheap on top of the production. Everything looks colored in Grey and a blurry sky is a horrible backdrop for the post-apocalyptic setting.

Most of the second act is Pamela showing herself off because of who she is. She lays in a tub that would have to be made of glass and when she gets up to get a towel all the bubbles are magically covering up her parts. Just before she manages to put a robe on, she swings it open in full view of the camera like this is supposed to mean something. Pamela is not the greatest actress and comes off as eye candy that gets tiring when everything that is happening is making you scratch your head. She comes off as trying to hard to be this bad-girl mercenary that everyone is supposed to know. I will say this, compared to the other actors in the film, Pamela is the one that attempts to work. She's not a terrible actress, the filmmakers just put her in a movie because of her boobs and didn't know what to do with anything else.

The other actors are so bad, it makes you wonder how they got hired. Anyway, the plot doesn't really give us a detail about this "war" because it's too busy focusing on several other subplots to become too crowded. One of the characters in this picture is a big fat black stereotype as he is always eating Chicken, not to mention offensive, that is wedged in the shovel of a caterpillar tractor called, Big Fatso (Andre Rosey Brown). He shows up just to become a backstabber before being blown to hell with a grenade. None of the characters matter in the picture and we feel nothing for them.

Apparently, Barb is the key to solving the whole situation that is going on but it mentions it and then never brings it up again. in favor of something stupid happening in the background. The screenplay was written by two people, Chuck Pfarrer who is actually a former U.S. Navy Seal and the other one is, Ilene Chaiken. Neither of them can write a screenplay and it shows. Anyway, the ending is what you would expect and the whole movie comes to a close. I should have known what this picture was going into it but I also thought there was no way it could be good and I was right.

Review by Shilo Sixx from the Internet Movie Database.