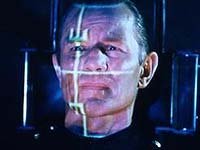 I'm a sucker for space movies, but even before this one started, I knew it would be a bomb because the "Coming Attractions" on this rented video were themselves so awful. I saw this film in a weekend-long adventure in masochism that included "Ghosts of Mars," "In the Dead of Space" and "Trancers."

"Dark Planet" is appropriately named: Everything in this film is dark, presumably to save money on sets. Or maybe in the 26th century, people have sharper vision. Or maybe they're trying to save power, like the Albertson's supermarket near my house that has a big sign on the door saying they have turned down the lights to save electricity. Any crew member of the starship Scylla better have night-vision goggles, otherwise they will be stubbing their toes in the subfusc gloom.

The special effects for this 1996 film were not just dumbfoundingly amateurish, they were so cartoonish they reminded me of Terry Gilliam's animation style. Alas, Gilliam was not around to give the effects sequences a Pythonesque breath of fresh air. It wouldn't have fit the film but anything would have been an improvement. Add to that the inexplicable plot and you have all the ingredients for a real stinker. Every once in a while the script almost but not quite rises to an engaging level, but then sinks into banal absurdity again.

The cast is a mix of well-knowns, lesser-knowns and unknowns. You wonder how the bigger names got suckered into this turkey: Were they hard up for dough? Did they have nothing else to do that weekend? Watch Oxford graduate and Shakespearean actor Michael York in this and one thinks, 'Oh, how the mighty have fallen!' Harley Jane Kozak radiates beauty and intelligence even in this dog of a movie; a look at her disappointing filmography suggests that she has not been well used in Hollywood. Maybe the nickname Harley (apparently from the motorcycle) fools some people into thinking she's a guy or maybe they think she's a Hell's Angel chick. Paul Mercurio seems to speak American most of the time---or else someone else is dubbing his lines---and then every now and then his native Australian slips through. I guess the filmmakers were too sloppy, too cheap or too lazy to re-loop those lines.

In conclusion: If you have a yen for a really bad movie some weekend, skip this one and rent something truly memorable, such as 'Santa Claus Conquers the Martians.'.

Review by mfisher452 from the Internet Movie Database.