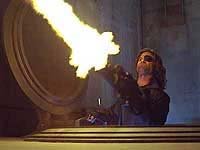 So the first film was set in the distant future of 1997. In this sequel a massive earthquake hits LA and practically wipes it out in the distant future of the year 2000. And now in the present day of the year 2013 'Snake Plissken' is brought back to once again rescue the USA. I just find it amusing how these now old films are out of date with their 'distant future' dates. Also on a personal note it sorta affects the films impact for me, dunno why, I guess it doesn't hold the same futuristic feel obviously.

Snake is back! he's still bad, he's all in black and grunts more than ever (did he really need that heavy full length trench coat?! oh wait...it was for the coolness factor wasn't it). Was this specific adventure required? no not really, the plot is exactly the same as the first film, swap a President for a black box. I think the problem here was everyone wanted to see more from Snake and we all knew damn well it had to go down the same route really. I mean sure we could see any kind of action thriller with Snake but it had to have that same kind of lingering dread, the same countdown threat for Snake to feed off. In that sense the film works well and does offer another nice apocalyptic atmosphere.

Yet despite Snakes awesomeness we all know how badly this film turned out. I think the main issue was the fact the film simply plods along from one set piece to another like a video game, accept the plot in between is very thin. It also comes across very obviously that Carpenter wanted to include as many extreme sportssituations for Snake as possible with no real reason for them, just to boost the coolness levels. We see Snake surfing on a tidal wave!, hang gliding whilst using a sub machine gun, riding a motorbike (although admittedly that was uber cool), playing basketball like a pro etc...Like many sequelsrebootsremakes Carpenter makes the classic mistake of going totally totally overboard with everything when he didn't need to. The first film didn't have all these extravagant set pieces, it was just Snake being the epitome of a badass in that epic Clint Eastwoodman with no name kind of way.

From the very beginning the film just follows the first film too closely. Plus the initial narration makes little sense, the President seems to know about the pending quake yet no one else does? no one does anything?. It conveniently leaves LA as an island...like the President said it would? wut? how did he know??. Why didn't they just create their own area for the unwanted instead of waiting for a quake which may or may not do what they were waiting for?...or so it seemed.

The other main poke in the eye was the absolutely horrific CGI and bluescreen work all the way through the film. I saw the film when it was first released in the cinema and I do recall thinking even back then it looked a bit hokey, of course at the time it was fine but looking back now its dreadful!. The sequences of CGI look amateurish at best, the underwater sub sequence is bordering on the kind of B-movie trashy CGI you'd expect from The Asylum...if not worse. Lets not talk about that hideous Universal Studios homage with the 'Jaws' appearance. Coupled with that you then have some awful bluescreen work throughout which just sticks out like a big red sore thumb.

The casting in the film is good, again don't get me wrong not everything was bad, but it just wasn't utilised correctly. Did we need government men being all gruff like Van Cleef from the first film? Bruce Campbell and his plastic surgery nightmares were a good touch but all too brief and again highly campy, Pam Grier is in the dictionary under cult movie star but her role here is just plain lame and not fully realised, Fonda's character is pointless and the main bad guy 'Cuervo' was like an old campy Bond villain...plus he has been clearly modelled after Guevara.

It really is such a shame as everyone wanted more Plissken badassery and this film was like a bit of an insult really. There are some nice touches dotted around don't get me wrong, Snake on the bike was cool, seeing an old Snake was cool, the brief showdown with Bangkok rules was nice errr...I'm struggling. Carpenter pretty much rehashed everything from the first film but made it more campy, the grittiness was gone and replaced with lame characters from a panto. Name of the game...campy.

Its a strange mix really, a blend of top ice cool imagery and quips alongside watered down camp hijinx, with a small small smattering of blood. The film seems to be almost parodying the genre yet at the same time going along with it and trying to be semi serious. Myself I do like it to a degree mainly because of Snake but I just wish there was another chance to make up for this damp entry. The film does end with a good setup for 'Escape the Earth' or maybe how about some Snake Chronicles? we need to see Snake once more before its too late (and no new casting with reboots thank you very much).