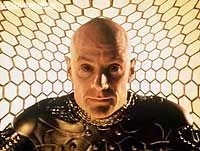 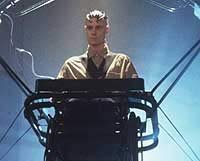 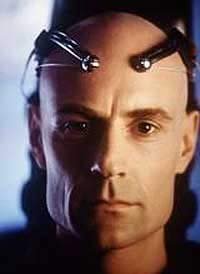 The original film is awful and so is this obnoxious sequel, which scores points for improving ever so slightly on its predecessor but loses them again for being so devoid of potential that even Jeff Fahey said no thanks - and look at some of the rubbish he's made. (How great was he in 'Lost', though?)

Matt Frewer replaces him as the computer-enhanced genius who's now floating around in cyberspace with a desire to take over the real world. Trying to stop him are Austin O'Brien, forgotten child actor returning from the first movie, and Patrick Bergin, whose career's seen better days. With a trashy script, a story which barely fills the eighty-five minute running time and performances which rarely rise above the level of shite, the movie's left with nothing to wow you bar its beloved VR segments, and they're nothing special.

The plot jumps ahead of itself so often it soon becomes clear that huge chunks of the movie have been hacked out, so there's something to be thankful for.

Review by mutty-mcflea from the Internet Movie Database.