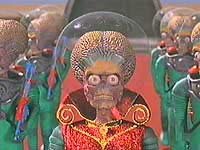 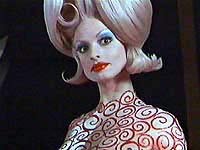 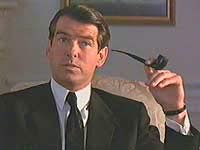 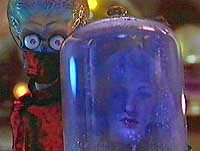 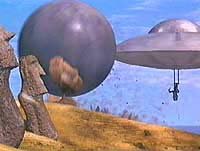 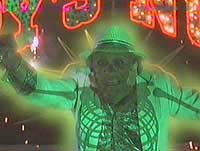 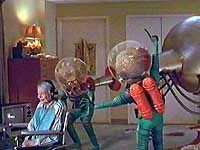 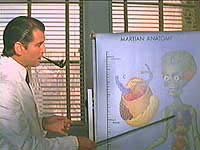 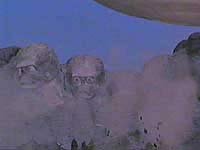 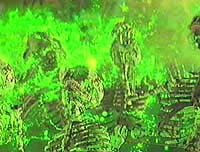 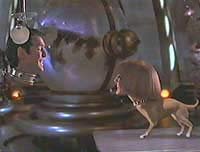 I remember when "Mars Attacks" came to theaters in 1997; one year after "Independence Day". The similarities between the two movies were blatant, and I couldn't believe that Tim Burton didn't intend to make a parody of Roland Emmerich' blockbuster. Two films featuring Aliens' invasions, Earth destructions prevented in-extremis thanks to a cleverly hidden McGuffin, with an all-star cast and heart-pounding sequences of buildings exploding and crowds panicking, there was no way that Tim Burton didn't take his inspiration from the first film which I enjoyed so much I enjoyed the second even more.

It's only later that I learned that the films were actually released on the same year, that Tim Burton had no idea of the other project and simply made his tribute to the good old Sci-fi B-movies that nourished his childhood and inspired his masterpiece "Ed Wood". You know, these movies with fake-looking flying saucers and weird-looking green creatures supposedly coming from the Red Planet. I guess "Independence Day" looked the same because of a similar inspiration. The difference is that "Independence Day" takes its stuff seriously but the viewers didn't need to and enjoyed the film for what it was, an action-packed adrenalin-inducing spectacle and "Mars Attacks!" take for granted our detachment and make fun of it, with us.

The result is a hit-and-miss for each movie, while "Independence Day" was a ground-breaking movie on the field of special effects, through notably the unforgettable destruction of the White House, the Empire State Building and many other cultural landmarks, the film suffered from its own heavily patriotic undertones, reaching the peak of ridiculousness with President Bill Pullman's inspirational speech about the independence of the world coinciding with the National Day, as to suggest that USA works like the world in microcosm, not the likeliest attitude to appeal to international crowds. However, we would accept it since only Hollywood can make such films, they deserve to make their country the real star.

The second criticism was the portrayal of the Aliens who looked like some mixes of the Aliens, the Gremlins and giant octopuses, making impossible to believe that these animalistic creatures would be capable of building these sky–covering giant saucers, especially since they were supposed to work like 'computers'. One quick glimpse on Tim Burton's poster proves that his Martians, no matter how cartoonish they look, make more 'believable' invaders. They look like human skulls with giant heads (more room for the brains I guess) they're ugly, even scary, but you can take them as 'people' from other planet, and if they talk the talk (a successions of 'dak dak' translatable to English), they also walk the walk.

But that's a superficial judgment, on the content, Tim Burton, with his predilection for Black Humor mocks all the archetypes of the genre, starting with the so-called superiority of humans in general and Americans in particular. The White House is destroyed; the President is totally defenseless despite his General's coercions to launch a nuclear missile on them. And nothing seems able to destroy their Martians; a flag-brandishing soldier gets immediately laser-ed and turns into a skeleton. That's the kind of stuff you'd never see in "Independence Day", the fact is that there is no lovable, no charismatic, no hero in "Mars Attacks", not in cinematic standards anyway.

What we have instead is a great all-star cast taking each role with fun and innocence. Pierce Brosnan is a charming and distinguished engineer who seems both fascinated and pleased by the new arrival, Annette Bening is a peace-loving dim-witted woman who believes the Martians will bring peace; Michael J. Fox and Sarah Jessica Parker (in love with Brosnan's character) are the obligatory scoop-driven journalists. Martin Short is the constantly excited White House Public Agents and Jack Nicholson plays a dual role as a Las Vegas crook and the American president, curious to meet these creatures while the disgusted First Lady (Glenn Close) would refuse to serve eat off the Van Buren china. They have (naturally) a daughter, played by a teenager Natalie Portman, who wouldn't care less if Michael Jackson was coming.

All these people, and many more, from the underground side, Joe Don Baker as the redneck father of the ill-fated soldier (Jack Black) and a donut shop working boy (Lukas Haas) he treats like a bum (who'd inevitably turns out as a hero) thanks to the help of his grandmother (Sylvia Sidney) whose main leisure consists on listening to Hank Williams' songs. This colorful gallery provides many different reactions toward the Martians' coming until the Leader destroys a beautiful dove, suggesting that the Aliens hate birds. He also kills General Casey (Paul Winfield) in one of these scenes that would make any viewer cheer, as the way Rod Steiger, the most hawkish of all, gets shortened and stamped on like a miserable bug, some bits of humor that would have probably been regarded as unpatriotic during the Bush years.

Tim Burton certainly had fun making this film and so did the actors, so I don't see how anyone can't enjoy it. I was surprised to learn that the film didn't meet with positive reactions. I didn't believe it wasn't nominated for Best Visual Effects, or maybe it had the misfortune to be released right after "Independence Day". I suspect the release of "Men In Black" hurt the film more since the film had a sharper humor and set higher standards in terms of special effects. Still, "Mars Attacks!" is great entertainment with an interesting ending, and a bad-ass duo featuring Jim Brown and Tom Jones.

And whoever played that female Alien was so damn stunning!

Review by ElMaruecan82 from the Internet Movie Database.