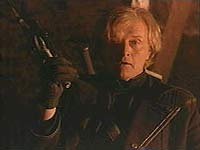 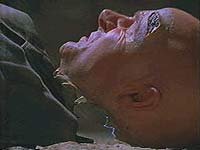 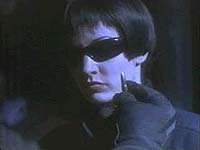 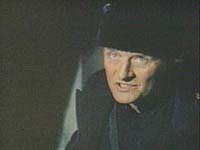 Omega Doom starts at some point in the near future as a war between humans & robots draws to a close, on the last day of the war a military robot named Omega Doom (Rutger Hauer) is hit by a stray bullet which wipes his directives & programming out & he suddenly develops a mind of his own... Planet earth is a worn torn wasteland ruled by gangs of robots who now fight amongst themselves for total control of certain areas since there are no more humans to fight, although rumour has it that a group of humans survive & will one day rise from their hiding place & reclaim Earth using a vast stockpile of hidden weaponry (yeah, this really is as bad as it sounds). These days Omega Doom roams the Earth as a loner, he stumbles upon a rundown town where two sets of rival robots, the Droids & the Roms, are both searching for the supposedly hidden weapons but each side has limited knowledge where they are. Omega Doom decides to play them off each other in an attempt to discover the location of the weapons...

Co-written & directed by Albert Pyun Omega Doom is one really bad film. The script by Pyun & Ed Naha steals it's main ideas & themes from other much better films such as the fight between man & machine taken from The Terminator (1984), the spaghetti western style loner drifting into town & playing two gangs off each other stolen directly from Yojimbo (1961) & countless other westerns, the soulless robot who suddenly gains human emotion that has been done countless times including Short Circuit (1986) which probably isn't the best example but you understand what I'm trying to say. So besides not having an original bone in it's body Omega Doom is also really slow, tedious & boring & I almost fell asleep watching the thing. There are big problems with the story too, nothing is really explained that well & Rutger Hauer's character is just puzzling as he isn't given any sort of motivation or purpose other than the vague fact he wants to create a peaceful Earth by making everyone kill each other! Sure, I can see the logic in that! It takes itself far too seriously & the whole sorry film is a bore from beginning to end, I'm sorry but as far as I'm concerned it's as simple & straight forward as that.

Director Pyun was obviously working with a low budget which is no excuse, the entire film is set in one city block, neither 'gang' seem to have more than three members, the fight & action scenes are pathetic, there's no excitement, atmosphere, violence, gore & a war that has virtually destroyed the entire planet is depicted by having Rutger Hauer kill one person in front of an explosion! There is one other highly annoying aspect to Omega Doom, that is every robot makes stupid & irritating whirring & pneumatic noises when they walk or move except Rutger Hauer's character who doesn't for some reason. Remember when I said there was one more highly annoying aspect of Omega Doom? Well I lied because there were two & the second one being the cringe worthy comic relief robot who keeps getting decapitated.

Technically the film is average, director Pyun films in the usual dark blue tones & bright orange candle light ones that are so popular in this type of film (Terminator 2: Judgment Day (1991) anyone?). It was shot in Slovakia apparently, not that you would have known. The sets are just run down houses & basements, the production design is bland & dull with a standard low budget post apocalyptic look about it. The special effects are poor as well. The acting was brilliant considering the cast were supposed to be stiff & emotionless robots, damn they did a good job!

Omega Doom has to be one of the worst sci-fi films I've seen, I hated it. It bored me to tears, it was a complete rip-off of various other much better films & I'm just glad I didn't waste any of my hard earned money on it. This is definitely one to avoid unless you're an insomniac as Omega Doom will get you to sleep in double quick time!