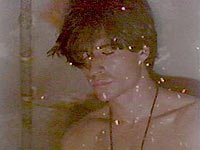 I shudder to think what people must have thought of environmentalists after viewing this piece of overbearing, preachy cinematic trash. Larded with enough Indian-wannabe nuttery and space brother buffoonery to stock a new-age shop, Starlight makes anyone who gives a damn about the planet look like a feather-wearing crystal-fondling idiot.

The plot? Alien Rae Dawn Chong arrives to guide a flute playing underwear model in a mystical quest to avert Earth's impending environmental collapse. But first they must defeat an evil alien who looks nothing so much like a refugee from a Castro street bar. Fortunately, they've got mystical grandpa Willie Nelson along to help (who looks faintly embarrassed by the proceedings, as well he ought to be) along with buckets of cheap FX and reams of pointlessly swelling music.

Sure, the clunky script helps to obscure the film's trite plot and staggering pace, but that's just the tip of this melting movie iceberg. Everyone concerned with this film should have their union cards revoked until they complete a real course in environmental science.

Review by alansmithee04 from the Internet Movie Database.