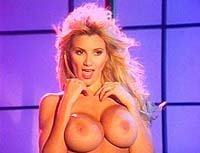 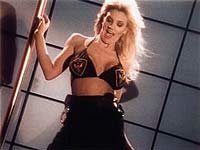 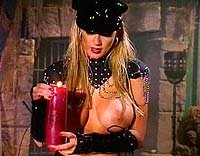 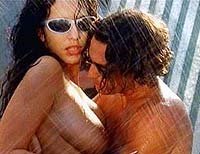 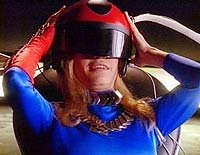 I've seen most of them and, like other guys, F-Fwd to the sex scenes (for those of you looking for celluloid with class, aka plot, you won't find it in any of Surrender's stuff - that'd be akin to me expecting my employer to give raises, hahahaha...). But I don't drool over them (ran out of drool), rather I look for some level of realism in the sex scenes, the "eloquence of their efforts" (reality of their faking). I guess I've grown bored with the ho-hum 'undress and caress wo impress' scenes. Any Shannon Tweed flick has at least 3 of these scenes - all of her films were meant for insomniacs!

I look for the usual giveaway positions such as the way over-used 'girl riding the guy's thigh' scene, both standing upright with him behind her, either of them grinning as though the camera operator just farted (look like Ken & Barbie dolls with their super-plastic 'ain't I beautiful?' smile), any tell-tale sign of the G-cover (not the G-string, this is a white stickem patch meant for guy's genitals), etc. - you get the picture. After a few of these rentals you'll start thinking of better uses for your money, like firestarters.

Even though this flick was thin based on my earlier mentioned expectations in realism it had a couple of semi-believable moments, thus I dub it a 'watchable' status for the rest of the testosteroned-Thogs out there, but as I said earlier there are better ones!

Review by Mangler from the Internet Movie Database.