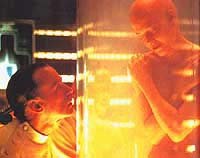 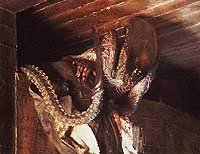 The most irritating thing is that the blame can't be heaped all on one person. Everyone involved in the making of Alien: Resurrection has made their own contribution to sinking the project. What's less irritating is that taken as a whole, the film cannot stand up to even the most lenient critical analysis, making a review less a challenge to one's analytical talents as an exercise in creative writing.

The film's plot is hamstrung by the same problem as its predecessor - namely that it cannot by conventional logic exist at all. It handles the problem just as deftly as Alien 3 - it provides an explanation that is blatantly impossible, but serviceable enough to launch the film. Where Alien 3 claimed that a face-hugger was somehow on the Sulaco's lifeboat, Alien: Resurrection has Ripley being cloned from a drop of blood 200 years later, bringing along both the alien embryo and her memories. Both films' scripts had the sense not to dwell on these and simply get on with the story they've opened up for themselves.

From here, it follows that the queen from Ripley has been put to work by the army laying eggs for the deliberate impregnation of some luckless human subjects. The resultant aliens will then tamed and used as the next generation of attack dogs. A six year-old fan fiction author could predict that the aliens will prove more belligerent that expected, get loose, and start killing.

The film's sole creative coup, however, is the treatment of Ripley. Apparently some of the alien's DNA has worked its way into her. This gives her some new traits like phenomenal tolerance for pain, a border-line sixth sense about the world around her, and of course, the old ultra-corrosive blood. There's also been some human spill over into the aliens.

It's an inescapable truth about film history that third sequels usually have the cards heavily stacked against them, both in terms of budget and creativity. Alien: Resurrection clearly does not suffer from the former, being budgeted at $70,000,000. Even the latter doesn't seem lacking at times. The basic premise is of course flawed, but adequate to get the movie going, and the film is definitely not squeamish about introducing new ideas. And this may be its chief stumbling block. The new scenario was sufficiently different that even a recitation of the formula would have worked decently. The first half of the film seems to be along these lines, and so if not great, it's at least watchable. But the second half veers too far into new territory, and leaves behind anything that was comfortingly familiar, dragging the film down to the point of being almost unwatchable.

Regarding the most important aspect of the film - the aliens - things are muddled. On the one hand, they have never had more screen time. Excellently digitally rendered, they have a fluidity of motion to them that evokes the Jurassic Park velociraptors (indeed, in one scene, a low-angle shot of their hip structure reveals them looking exactly like one of Spielberg's raptors). On the other hand, the digital trickery becomes painfully obvious at times, robbing the aliens of the physical menace they've had before. Also, they're slimier than ever. Their complexion was always rather greasy, but now they seem to drip and drool in never-ending streams all the time. It does have a certain visual appeal to it, but can also be distracting at times. Also, their trademark hisses and strange alien scrams are gone - replaced by a standard issue set of roars and growls. This is less appealing. Totally indefensible, however, is what's been done to their deadliness. In Aliens, James Cameron deflated the myth of the aliens being all-powerful and showed them to be perfectly mortal, but they were still very tough customers. Not so here, where the aliens' deaths are swift, perfunctory, and unmoving. And regarding the legendary reproductive system of the aliens, even this movie's chest-bursting scene is almost completely ineffective - an entire world removed from John Hurt's timeless demise in 1979. One of the film's most inexcusable crimes comes during a scene where the team has to swim through a flooded section of the ship. The flaw of the scene taking far longer than anyone could hold really hold their breathe is forgivable - it's one of the most common in the cinematic world. Even the ultra-clichéd victimizing of one disposable character doesn't draw too much ill will - it's too familiar. What cannot be forgiven, however, is the treatment of the aliens following them and attacking. It's exactly like Deep Blue Sea, right down to the way the aliens move - unconvincing streaks of CGI moving in sweeping arcs with far more speed than they could possibly generate. Ridley Scott's original was often called `Jaws in space.' It's as though all pretence has been abandoned, and we're back in the water.

This failure is built upon in the next scene, which surely must deserve an award for the compression of the most idiocy into the shortest stretch of screen time. An intriguing plot point about the aliens having set a trap on the other side is robbed of the tension it deserved, and resolved in one of the most unconvincing displays of movie physics ever. In an ensuing chase scene, an alien spits that a jet of that lethal acid that we've come to fear over the last three movies, and it gives its victim the mildest second-degree burn possible. And the alien is then killed with a single bullet to the head. The climax is even worse, taking a monumental decision for Ripley that ought to have been character-defining in the extreme, and instead giving nothing more than some disturbing gore, followed by another display of movie physics at their most blatant. We don't even see the aliens again for most of the third act.

Jean Pierre Jeunet obviously wanted to put his own personal stamp on this film, but in doing so he shows far too little respect for the franchise he's working with. Alien is now more in need of resurrection than ever.

Review by kingtanichi from the Internet Movie Database.