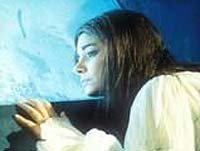 I just watched this movie on the Sci-fi network. Let's make one thing perfectly clear: there has never, ever been a quality film or television show that has used the phrase `It's on a need-to-know basis'. Once you hear that phrase, and its subsequent follow-up phrase `believe me, I need to know', you can rest assured you're watching something written by someone with absolutely no creativity.

Sandra Bernhard is terribly miscast in this five hundredth derivation of `Alien'. Whining and sneering her way through this movie, she sounds ridiculously unconvincing spouting the technical mumbo-jumbo necessary for science fiction films. She aint no Sigourney Weaver, that's for sure. How someone so marvelous in something like `Roseanne' can be such a bad actor in films like this and `Hudson Hawk' is one of the mysteries of life.

This film has the production values of a high-school play: cheap-looking sets, bad lighting, and clumsy-looking props. The spacesuits look like second-rate rejects from Joe's Army Surplus. When Sandra comes back into the ship after a spacewalk, she flips the visor lid up, and there's no seal around it! The flimsy visor looks like it was made from a clear plastic pie-cover from Safeway. There are no special effects, unless you call an exterior shot of the spaceship a special effect. They couldn't even spring for some fancy flashing lights or decent music; tapping military-style drumbeats punctuate some of the scenes, while someone practicing a bass fiddle provides the rest of the music.

Typical of bad films, during the shootout scenes, many many shots are fired in all directions, but it is only coincidental that anyone gets hit, even at point-blank range. Is it wise to fire a gun onboard a spaceship while you're surrounded by all kinds of machinery that is keeping you alive?

Most of the film consists of close-ups of people standing around talking or arguing while sepia-colored walls float in the background. I'm convinced that the dialogue was written by a thirteen-year-old boy after watching video games for eighteen hours straight: `she belongs to me', `it's stuck in a loop!', `you don't drink martinis!', and so forth. You get the idea.

As if that isn't bad enough, a videotaped Laura San Giacomo rocks back and forth spouting Shakespeare. Good thing she had `Just Shoot Me' to fall back on.

The only way to describe the quality of this film is that this is the kind of movie they show on Saturday afternoons when the football game is pre-empted. The television station figures `what the hell, there's no one watching anyway.' It's either that, or an infomercial.

Review by bregund from the Internet Movie Database.