TV Spot - These Babies Speak Their Own Language
0:31 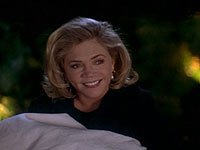 Well, if you're reading this you've already read the title of the film. Do you honestly need anymore to tell you how bad this film is? Just in case you weren't tipped off by the title, it sucked. But in fairness how do you make that premise work? Baby Geniuses is never going to be the next Citizen Kane any time soon is it. It sounds more like a writer wanted to make his child into a movie star and used this film as an excuse. I largely watched it because I had a morbid curiosity to see it. It was that same kind of curiosity that makes me wonder just what it would feel like to put my hand on an open flame. I knew I would go through pain but it will give me something to talk about to you psychiatrist.

Just like any film, this does have a plot. A dumb plot, but a plot none the less. It follows the premise that all babies are born with intelligence far beyond that of any adult, but that they lose this intelligence when they get older. (I said it had a plot, I did not say that it made sense...) In one evil lab then they are doing tests to prove that babies can talk by separating twins with one being raised in a lab and one being raised in a regular home environment but are never allowed to meet as it would tamper the experiment. But through the power of bad story telling the child escapes and the wrong twin is brought back to the lab.

From this premise alone I begin to wonder what producer saw this script and actually wanted to spend money to make it. As it turns out it's Steven Paul, who is also the writer of the film and the same producer who helped us see Ghost Rider: Spirit of Vengeance. He seems to specialise in films that must be trying to be bad. But the problem is that his films are not "so bad they're funny" where you laugh because of how stupid the film is. Instead they're just very unpleasant films to watch. In fact, watching this film I didn't laugh once. Not once. It seems to have confused the idea of being annoying with that of being funny. Otherwise I would have no idea of why they would put so much noise of baby giggling in the film. When it's your child giggling you may enjoy it because it's your child, but on screen it is a hair pulling annoyance for all ages.

Added to this is that the film is also very creepy, with the babies lip syncing in this being comparable to the last Twilight film (not quite as creepy as that one but we're in the same area of creepiness). And that isn't the only off putting element of this film. When you watch it then you have to witness the awkwardness of extreme close ups, a baby dancing like he was in a 70's film and terrifying giant robot mechanic babies. For the most part a lot of the film could probably be cut out of the film and put into a horror movie, because I certainly felt closer to being frightened then I was to laughing.

Another annoying thing that this film has is Christopher Lloyd. In the film he is neither good nor bad. But I know Lloyd and he is capable of doing so much more than some of the garbage films he's done. The thing is this isn't even the worst film he's been, also appearing in Foodfight and Piranha 3d. I'm guessing he gets paid for it, but he's Christopher Lloyd god damn it! He's the Russian who tried to kill Anastasia! The scientist who created time travel! The killer who framed Roger Rabbit! He can play so many memorable roles, but keeps wasting his talent on films that are beneath him! He's a great actor and I can only hope that he will stop choosing such awful films...

But Lloyds presence in the film is not the most upsetting thing. The saddest part about this film is that, adjusted for inflation, it earned over 50 million at the box office. People paid money to see this in a cinema. I get watching a film to laugh at how bad it is, but I really question the human race as a species when in a month where films like Lock Stock and Two Smoking Barrels and Analyze this come out people pay this much money to see a film like this. Worse yet because it did well at the box office, this film got a sequel. Yes, we live in a world where Dredd is a standalone film and Baby Geniuses gets a sequel. I have yet to see Superbabies: Baby Geniuses 2, but somehow people say it is worse than the first.

But I'm getting off track, so I'll leave you with this warning. This film was painful to watch and exists for no other reason than to be creepy and annoying. And if you have a twisted mind and get a kick out of listening to babies scream and laugh for an hour and a half then this could be your film. But if not, the only way you could possibly gain pleasure from this is by mocking it.

Review by rcolgan from the Internet Movie Database.