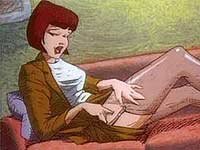 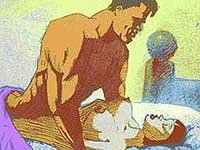 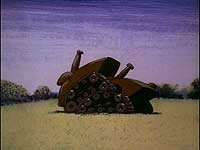 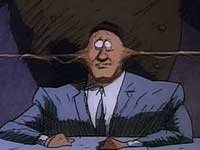 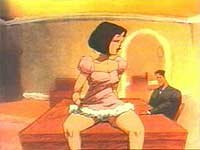 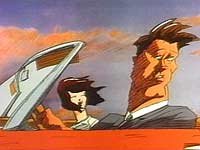 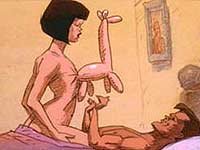 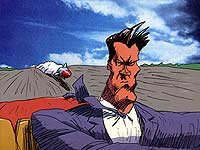 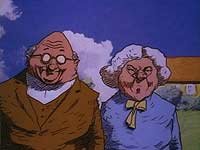 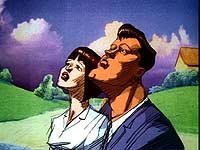 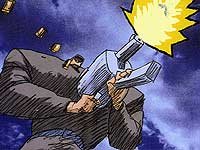 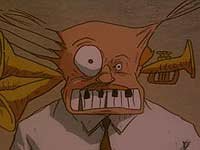 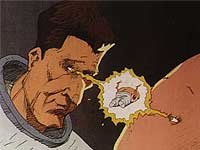 I've been a fan of Bill Plympton's ever since first seeing his Oscar-nominated short "Your Face" about 12 years ago as part of the traveling International Tournee of Animation. Plympton started out as a magazine cartoonist (an early version of "How to Kiss" was published in "Rolling Stone" in the early 80's), and his early short films were based around single gags or concepts. On the basis of these shorts I knew Plympton's animation was kind of primitive, that he had excellent timing, and that he had a flair for metamorphosis and the grotesque that recalled such distinguished predecessors as Otto Messmer and Tex Avery. Unfortunately, I found Plympton's first feature, "The Tune", rather disappointing. The story was weak, and the best parts were the shorts that were incorporated into the feature ("Wiseman", "Push Comes to Shove").

With this in mind, I approached "I Married a Strange Person" with some trepidation. I'd heard some good things about it, and it was such a shock to find it for rent here in Tulsa that I snatched it up right away. It turned out to be a pleasant surprise, so much so that I had a hard time figuring out just what I liked about the movie. All the usual virtues of Plympton's animation are there, and the story starts out nicely enough-a new bridegroom gets zapped in an accident involving a satellite dish and a pair of over-amorous birds, giving him strange and wondrous powers.

What made the story work at first were the appealing characters set within it, the new husband Grant and wife Kerry. Most of the time their actions and reactions were very believable, whether the situation was realistic (the sexual tension between the newlyweds at the beginning-she's in the mood for love, he feels he's got to work overtime to support them) or fantastic (Kerry's alarm, and later anger, when Grant's stray imaginings begin coming to spectacular life). The quality of the animation and design helped, giving depth and texture to Plympton's characteristic style without making it unnecessarily slick. Tom Larson and Charis Michelsen, who voiced Grant and Kerry respectively, deserve considerable credit as well. Maureen McElheron's songs don't hurt either; where much of "The Tune" seemed to be an excuse for the songs, here the songs served the story by setting the mood. I especially liked "Honey How'd You Get So Cute", which (along with Plympton's animation) effectively captured some of the playfully absurd aspects of eroticism.

Unfortunately, the quirky romantic fantasy at the beginning gets shunted aside when an unscrupulous media mogul learns about Grant's new powers and sends a paramilitary squad to capture him. This plot device reminds me of Disney's old comic fantasies-not the animated ones, the live-action ones, the ones with Fred MacMurray or Dean Jones or Kurt Russell as the hero and usually Keenan Wynn as the villain and they also had sentient-or-flying cars or teenaged computers-or-sheepdogs or stuff that bounced higher than the height from which it was dropped. Actually, I dug those films when I was a kid, and I bet Bill Plympton liked them too, but he does little to vary their formula when he applies it here, apart from dollops of sex and violence and a bit of satire.

The plot also threatens to derail the characterizations that were established so well in the first part. Simply, all scenes where the characters' actions follow from their previous behavior work; when a scene doesn't work, it's usually because a character's integrity has been violated for the sake of a gag or the convenience of the plot. I don't know if this means Plympton andor his collaborator P. C. Vey are still learning how to maintain a story at feature-length, or if they just couldn't resist their impulses to go for quick and dirty laughs, or both.

Nonetheless, despite its flawed or hackneyed aspects, "I Married a Strange Person" is very watchable as a whole film. It is also evidence that Plympton and company have a really great film in them somewhere. Let's hope they put it all together next time.

Review by RobT-2 from the Internet Movie Database.