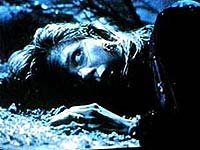 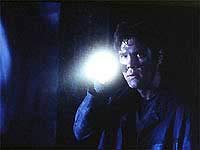 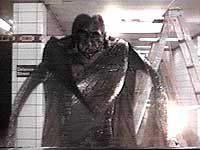 I had heard many good things about "Mimic" and I remember commercials for it when it first came out. Then...it sort of disappeared. Finally, some time later, I came across different snippets about it, and decided to see it. And I must say, I was impressed.

Mira Sorvino plays Susan Tyler, an entomologist who, three years ago, stopped an epidemic with her husband, that was passed through cockroaches. To do this, they released a breed of cockroach that would kill off the others, then die itself. Yet, it didn't die...it breeded. And the breed has grown to the size of humans--and larger. And they've mimicked their predator...man. (Okay, the literary technique is getting old, I know.) Anyhoo, Susan must return to the sewers where this breed was released, and get a specimen. But what she, and a handful of others, find, may possibly kill them and the entire city of New York. (And the world!)

Okay, cheesy-as-hell description, but you get the gist of it. Anyhow, it is a very well done film. The acting is suberb, especially from Sorvino. She has a Ripley-esque quality to her and is extremely likeable. Jeremy Northam is great, as well, as Peter, her husband. Charles S. Dutton got on my nerves as the overly-stereotypical black man, foul-mouthed and eternally ped off. Isn't that character just a little old by now? I figured Samuel L. Jackson drained it of any interest at this point. In this, Dutton plays Leonard, the transit cop who leads the main characters through the subways for their investigation. Noteworthy also, in smaller roles, is Alix Koromzay as Remy, Susan's partner, and Josh Brolin as, aptly enough, Josh, a detective. Giancarlo Giannini as shoe-shiner Manny felt a little out of place, but was likeable. The worst character in the entire film (with Leonard in second) was Manny's autistic son Chuy (Alexander Goodwin). Not only is the kid so utterly annoying in every moment he shows up in the film, but he's a waste-of-time character, and at so many moments could have been killed off (a taboo, killing kids, I know, but be realistic) but shows up alive. By the end of the movie, you get the distinct impression no one knew what to do with him. I thought a city bus could have gone by and hit him, and not felt it was out of place. He was the biggest detriment to the film. (And the whole spoons-and-shoe-type skill of his...God, I wanted to scream!)

The movie plays out quite well, with a great set-up, and for the last forty minutes, a heavy dosage of action and excitement. And what I liked was that the film didn't lose its brains. It's a terrific combination. I thought th e showdown between the final bug and Susan at the end was a little too short, but extremely tense, especially the chase towards the oncoming train (you'll see, it's terrific).

Overall, I definitely recommend this film. It's extremely well done. And except for Chuy (grr), Leonard's annoying characteristics (did you not see that he would help save the others by sacrificing himself, like, two minutes into his screen time?), and the very cheesy ending (so, what, they adopt Chuy?!), I loved it.