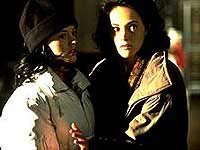 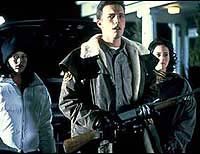 Dean Koontz isn't exactly the world's most prolific author. As a writer, he has the tendency to basically re-state his themes and plots over and over. His movie adaptations are usually messy, as clearly seen by such films as Hideaway and Sole Survivor. Thus, it comes as a surprise that Phantoms is an often terrifying thriller; it's not particularly original, but it delivers the thrills and suspense that it promises.

Dr. Jenny Pailey (Joanna Going) is bringing her younger sister, Lisa (Rose Mcgowan), home from L.A. to the small quiet town of Snowfield, Colorado. It's a peaceful environment to live in, with a population of 400, and the town has some nice ski resorts that make it a popular site during the summer. Upon returning, however, they discover everyone either missing or dead, with bodies that have a strange gooey look to it. They try to leave, but find their car and every other vehicle in town dead.

Exploring further, they enter a bakery, where they encounter Sheriff Bryce Hammond (Ben Affleck) and his two deputies, Shanning (Nicky Katt) and Stu Wargle (Liev Schrieber). As they look further into town, they discuss what could have possibly caused this massive disappearance and all these deaths. The mysterious cause behind this hasn't ended, however, and as the night progresses, Shanning is taken by an unseen presence. Hammond and the others must now try to survive the night and hope they can get off a message to the outside world of their plight.

Phantoms is a surprise on almost every level. It's a well-made thriller from Joe Chappelle, whose only previous major credit was Halloween 6, usually regarded as the worst of the Halloween sequels. He may have seemed like a dubious choice to direct this film, but he does a fine job, creating heavy doses of suspense through some clever uses in the small-town setting and the suggestion of an unseen force lurking around every corner.

The film is overall scary, working best when you have no idea what's causing this terror. The unknown is far more frightening, and Chappelle wisely plays this fun material for all it's worth, creating many eerie sequences, such as a slow exploration inside a hotel, the creepy use of Patsy Cline's "I Fall to Pieces," and an encounter with a giant moth that is positively heart-pounding. For approximately an hour, Chappelle keeps mounting the tension level in, throwing in a good amount of horror and suspense into the proceedings in a relentless manner.

The last half-hour isn't as successful because of it's need to slow down and explain everything. While all movies like this need to do that, for nearly 20 minutes the movie loses most of its suspense when the characters discuss to each other all the things they know about this mysterious presence. These moments are a bit messy due to the lack of some coherence in putting all the ideas in place. Thankfully, Chappelle brings back the horror and suspense that was so effective in the first hour back into the last ten minutes, and the film ends on a tense note. The finale's reliance on special effects slightly dims some of the highly suspenseful suggestive forces at work that was so effective in the first hour, but Chappelle still keeps the action moving.

Dean Koontz's script is somwhat successful. He builds in some intriguing ideas that are never fully explored, but to his credit, he had budgetary limitations and had to work with a 96-minute running time. As a result, the pacing is often so fast, you'll probably wish the film was at least another 15 minutes long.

The script is sometimes heavily reliant on many horror cliches, including people walking into dangerous places alone, which is something a character in this sort of film should learn not to do. But Chappelle still handles these scenes remarkably well, creating suspense in certain spots when it often hasn't worked in other movies. There are also some lapses in logic, but they can be ignored rather easily.

The film has many strong elements. The visual effects are quite good, such as the giant moth and the other strange creature designs. The setting is among the film's best assets. Smalll towns are usually great places to hide an unseen menace and this film pulls it off quite well. Many of the empty buildings, mainly the hotel and the police station, are great set-ups for some well-done setpieces.

The cast is good, and is one of the main reasons this thriller is as effective as it is. After having seen so many badly acted thrillers (i.e. Urban Legend, I Know What You Did Last Summer), it's great to see a talented cast at work. Ben Affleck is fine and charismatic in the lead role; he's a strong presence and creates a likable character, as he usually does in his films. The lovely Joanna Going is likewise equally good as the film's strong female character. She brings dignity and class to her performance. Liev Schrieber and Peter O'Toole are perhaps the scene stealers, with their mostly successful attempts at humor. Schrieber is mostly over-the-top, and often creepy, while O'Toole is wry and sarcastic. It's a bit odd to see such a legendary actor in a film like this, but he plays the role in the right manner. The only weak link in the acting is Rose Mcgowan, who seems more suited for jokey, "hip" horror films rather than a serious one, and she's sorely out of place here.

David Williams' score is creepy and good in creating some tension. It sounds somewhat derivative of the works of Ennio Morricone, but it still blends well into the film. The score is mostly a series of repeating notes, but it actually never becomes a slight annoyance, like John Carpenter's repetitious score in Prince of Darkness.

The final scenes is among the movie's flaws. It's slightly darkly humorous, as it is intended to be, but this ending has been done so often, it's become rather tiresome by now. It's obvious Koontz has become influenced by far too many modern-day horror films.

Phantoms isn't a classic film, since it has its own flaws and doesn't delve deeply into some interesting ideas, but it blends action and horror into a suspenseful and often scary mixture, with non-stop thrills and tension that keep the material fun to watch, even if the story's not always logical. Phantoms is a film good for many chills on a dark evening.

Review by jiangliqings from the Internet Movie Database.