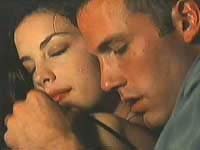 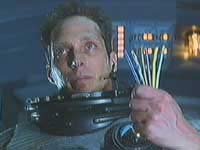 I regard the quality of Michael Bay's Armageddon with great sorrow but regard its enormous box office revenue with an even greater amount of depression. Has the magic of cinema been reduced to utter mindlessness that is devoid of content, meaning, and substance? You could defend the film by saying it's a "turn your brain off" film, but what kind of compliment or defense is to that a film? That's like saying it's a requirement to be stupid before watching it in order to enjoy the picture simply on an entertainment level.

Armageddon doesn't deserve that defense or any others. It's a terrible picture but in many ways does it embody everything that is wrong with American cinema as a whole. Racism, contrived emotions, overblown instances of peril, noisy, muddled sequences, hammy relationships, stupid characters, and patriotic, flag-waving nonsense thrown in for good measure. You look at a picture like this and wonder why we look like a slew of amateurs in terms of tonality and originality when compared with other world cinemas.

The story concerns the fact that an asteroid the size of Texas is on its way to earth, and NASA scientist Dan Truman (Billy-Bob Thornton) has a plan to bury a nuclear device deep inside the asteroid that will break the asteroid into two separate chunks and miss earth. You'd need Bill O'Reilly, Neil DeGrasse Tyson, and a slew of other journalists and astrophysicists to explain that kind of certainty. Desperate to find those that could pull off an operation like this successfully, NASA contacts Harry Stamper (Bruce Willis), one of the best deep-sea oil driller in the world, for advice and assistance in staging the operation. Harry, however, has his own problems like keeping his adult-daughter Grace (Liv Tyler) away from her new boyfriend, who happens to be A.J. Frost (Ben Affleck), one of Harry's younger, more irresponsible drillers.

Long-story short, he chooses to accept the mission and takes his crew of utter misfits along with him to assist him in these efforts. Among them is the overly-sensitive and sometimes violent Michael Clarke Duncan, the insane Steve Buscemi, the sophisticated prodigy Owen Wilson, the irresponsible A.J., and others. I don't care how desperate NASA would be in this certain time and I don't care how willing and confident Harry and his crew would be, nobody would send this crew into space under any given circumstance. The thought is truly baffling that the fate of the U.S. essentially rests in a man's crew who can't solve a simple problem without shouting or arguing.

But leave logic at the door, since that's what we're supposed to do and look at the film's aesthetics, content, and quality. This is an incredibly boring picture, disgustingly overlong, horrendously underwritten and underdeveloped, and unspeakably redundant. By the umpteenth explosion around the fifty minutes mark, I was ready to wave the white flag. How loud does a popcorn movie have to be before we get the point? How screamingly obvious does every explosion need to be that it had the mass, density, and magnitude to level buildings, burn infrastructures, and send the camera spiraling into a dizzying frenzy? Michael Bay knows how to make every scene into a spectacle, which is why he has garnered praise and criticism. Some can appreciate it craft as a valuable addition into cinema. I see it as an emphasis on fast food filmmaking, or in other words, filmmaking that has the power to make us demand less story-wise but crave everything action-wise. I'd call these films dangerous to the public because it stops the desire and hunger for creativity and encourages settling on the bare fundamentals of film. In a culture already so easily amused by reality TV and sheer stupidity, it is films like Armageddon we need to uniformly ignore.

And if it weren't the explosions being the driving-force the film's badness, it's the abundance of music and emotion to manipulate and tell you exactly how you're supposed to react and feel towards every setup in the film. Between the soundtrack of Aerosmith, Bon Jovi, and Journey giving us the exact feeling we're supposed to possess and the incidents that practically flash what mood we're supposed to feel on the screen, Armageddon offers no room even for audience reactions outside of the norm. If you ever wanted to watch a film and want to be in touch with the mood of the film so much so that you don't even want to process the information being shown to you than this is for you.

Armageddon, despite featuring one-hundred and fifty minutes of sensory annihilation in the way of sound and visuals, is one of the most boring films I've seen in years. Inert, lackadaisical, overblown, and lacking in creativity and interpretation, it has gone on to be embraced only by those who could stomach such a degrading endeavor. This is the only film I can think of that should come with an Ibuprofen and a watch with a purchase of the DVD.

Review by Steve Pulaski from the Internet Movie Database.