TV Spot - Your Story Just Walked By The Window
0:15 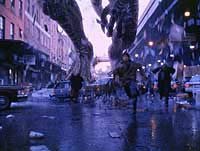 I REALLY hate this movie. Not just because it's a bad movie, though it most CERTAINLY is, but because of the mindset behind it. I love monster movies, but what I DON'T love is when somebody makes a monster movie SOLELY as an excuse to watch high octane action, explosions and apocalyptic destruction. "Godzilla '98" is a movie completely devoid of a single speck of intelligence or an ounce of heart. A movie with nothing to say, no deep themes to examine, no characters that compel you or grab your attention. Nothing but a 2 hour 19 minute destruction derby complete with bad jokes and bad acting.

Matthew Broderick is UNBELIEVABLY lifeless and wooden as the film's lead Niko Tatapulous. I can't even say that I hated his character because he's just so devoid of any personality or identity that I can't bring myself to feel ANY emotional connection to him, positive or negative. The rest of the cast are pretty much a bunch of tokens; the token girlfriend without a personality, the token mysterious foreign guy (In this case French) without a personality, the token slimy boss without a personality, the token stereotypical New Yorker without a personality and so on. Apart from Michael Lerner as Mayor Ebert and Lorry Goldman as his assistant Gene, (Who to be perfectly honest were the ONLY source of entertainment, comedy or joy to be found in this giant Kaiju turd) all of the performances in this movie are just devoid of care, interest or emotion. Even Hank Azaria, Harry Shearer (In perhaps the only role of his career where I would genuinely consider him to be not only annoying but ungodly so) and Jean Reno can't bring an ounce of life to this garbage. I honestly feel a little sorry for them.

The script is one of the most paint-by-numbers, clichéd, lifeless scripts I have EVER seen. You can predict every single plot point and every single forgettable character's uninteresting arc from beginning to end. Gee, will Niko end up getting back together with his ex? Will the military save the city from Godzilla without any major casualties? Will token ex-girlfriend quit her job after getting fed up with her slimy boss? Will Mayor Ebert end up getting fired? Will the token French guy complete his quest to find the perfect cup of coffee? If you didn't answer a groaned "Yes" to all of those questions then please...Seek help.

Speaking of the script, this movie is FILLED with plot holes. There are too many to count, and it's folly to go through every single one, but here is the big one; nobody can seem to find Godzilla in New York...How?! He's a giant lizard who leaves a pretty damn obvious trail of destruction EVERYWHERE he goes. Surely you'd be getting reports of his location like crazy wherever he was.

But the worst thing about this movie, the absolute WORST thing that brings this movie down to a truly special level of awful is the King of the Monsters himself, Godzilla. I don't mean his design, which I actually think looked downright awesome, or even the CGI, which I also thought was really, really impressive. I mean Godzilla as a character. In a GOOD Godzilla movie, Godzilla always has some kind of deeper meaning or social commentary behind him. Whether he represents the destructive nature of mankind with their nuclear programs, or vengeful Mother Nature reigning down on mankind after their destruction of the natural world, or even as something of a guardian angel that brings hope in times of fear. Godzilla in this movie has no deeper meaning. None whatsoever. All Godzilla is in this movie is a giant CGI abomination that merely exists to blow stuff up and cause as much destruction as possible. If Michael Bay's action scenes were a character, they would be the Emmerich's Godzilla.

And finally, we have the ending. Many people have commented on how ridiculous it is that Godzilla was killed by the military, and how either he'd have to escape, or be killed by another monster. Those people are 100% right. Godzilla's death is anticlimactic, unemotional, forced and the King of the Monsters ends up going out like a pansy. "Godzilla '98" can't even get the SIMPLEST things right.

I don't think I've seen such a clichéd, unoriginal mess take THIS little chances in years. There is nothing to remember, nothing to entertain you and nothing to compel or grab your attention. It may not be one of the worst movies of all time, but it is certainly one of the most soulless and unintelligent. The fact that somebody who didn't even like Godzilla was hired to direct the character's very first American movie downright disgusts me. Hollywood; stop making monster movies just to show monsters and destruction. Either have a point, have a story and have characters or leave the monsters we know and love alone.

Review by TheMovieDoctorful from the Internet Movie Database.