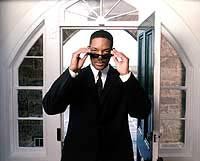 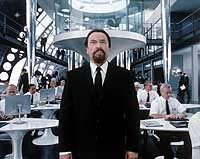 I am saddened to see that I have a maximum of 1000 words to describe the train wreck that is Men In Black II. Actually, the train wreck comparison isn't really fair, train wrecks elicit the famous rubber-necking syndrome, where human nature and its fascination with abomination demand at least a cursory glance at the smoldering wreckage. Men In Black II does nothing to make me want to watch it other than the chance to participate in a fun game of counting up how many different things Will Smith refers to as "joints" in the movie. Will Smith also uses this movie as an opportunity to produce another hit single. And by hit single I mean 70's song which he steals the music from, changes the words to, and then says "ha-ha" a bunch of times during.

Speaking of Will Smith, he returns to play his I'm-Will-Smith-and-I'm-in-a-movie-but-I'm-not-playing-Ali-so-I'll-just-prete nd-this-is-an-episode-of-the-Fresh-Prince-of-Bel-Air character that he's honed to perfection over the years. Taking his side for part of the movie is that talking dog from the first movie who has inexplicably risen his status from scum bag informant to MIB agent material because he is selected to be Will Smith's partner for a brief, although not nearly brief enough, portion of the movie. At this point numerous gags are made based on the fact that the dog is talking. This of course is funny because dogs don't actually talk. Pushing the inane envelope even further, to the point where I developed a facial tick, was when they had the talking dog sing along with the hit #1 single, Who Let the Dog's Out. Sony was obviously trying to cash in on the booming success of Disney's Snow Dogs, and I have to say that although I have not seen Snow Dogs, I liked it better.

The phrase cash in reminds me of another great feature of MIB II, the ubiquitous product placement. If you didn't know that Burger King and Sprint were tied to this picture before you see it, you certainly will after. Not that it interferes with the plot, since Sonnenfeld didn't seem to bother with finding one. What little semblance of a plot there is seems mainly concerned with fiddling around with the ending of the last movie so that Tommy Lee Jones can appear again in this one. Other than that, there's some Light of Zarra, or something, that can blow up the world somehow, or something, thereby leaving the audience with a feeling of suspense, or something.

"But Adam, summer movies don't need plots," you say, "just so long as they keep me laughing." Well I'm sorry my friend but every joke in this movie falls into three categories. 1. Hey, I remember that from the trailer. 2. Hey, I remember that from the first movie. 3. Right, I get it, its a talking dog. The part of the movie I found funniest was the guy sitting behind me in the theater who laughed uproariously at such scenes as, Will Smith driving up to a post office, or Will Smith saying "I'll be in the gym." He also liked the talking dog. Did I mention there's a talking dog? At least we know Sonnenfeld is laughing, laughing all the way to the bank. And good for him, he deserves it.

The actors themselves weren't that bad, even if you'd seen most of them before. As for the new ones, there was a slightly attractive love interest for Will Smith who I wish was hotter but didn't do anything to directly detract from the movie. You get to see most of Lara Flynn Boyle's breasts, which are remarkably large for someone who weighs 24 pounds. Jimmy Knoxville plays a dopey alien side-kick competently enough I suppose. The strange thing about Knoxville's character is that he seemingly vanishes without explanation about 23 of the way through the movie. However, in all honesty, they may have explained it and I just missed it while I was distracted by lighting myself on fire. There's also a talking dog, but I think I talked about him already.

All in all this movie was a double barreled misfire. No plot, not funny, no writers, no ending, but hey at least it was only 80 minutes long, that's $.10 a minute at your typical movie venue, a rate that could be much better utilized by calling your grandma in Topeka long-distance and telling her you love her. I honestly don't understand how anyone living outside of Kentucky or Upstate NY could possibly enjoy this movie. Do not go see this movie, I repeat, do not go see this movie. Take the $8 you would have spent on the ticket and play some mini-golf, buy your girlfriend an ice cream cone, make a donation to Greenpeace, something anything besides sitting in a darkened room for 80 minutes and trying to keep from scratching out your own eyes with the straw from your $4 soda. My recommendation is to wait for it to come out on video, and then rent something else.

Review by Adam from the Internet Movie Database.