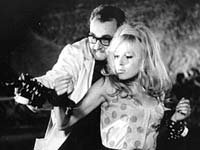 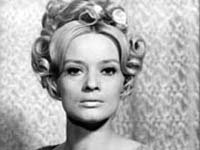 SWOOSH! ZOOM! THUD! CRASH! ROAR! RIP! No, not the opening credit sequence from a Batman film - but from "Who Wants to Kill Jessii?" (released in 1966 - which would be a year Batman fans would recognize;) two years before the Prague Spring was crushed by Soviet tanks rumbling into Czechoslovakia. Books, films, and newspapers were able to get in subtle (and sometimes not so subtle) digs at the establishment; science fiction has frequently provided a way to make social commentary which flies "beneath the radar" of censors, be they capitalist, communist, or socialist. But besides the sly jabs here and there - "Liberty to dreams!" - "Your identity card!" - "Can't she be re-educated?"(said: by a comic superhero; to a comic superhero; about a comic superhero) the film provides much amusement just on its own.

Rosie & Henry both work in a university setting. Rosie is a medical researcher doing research on dreams, presenting her KR VI injection as a way of changing nightmares into pleasant dreams. She demonstrates this with a sleeping cow - headphones attached, a monitor shows the cow's dream of being pursued by gadflies. After the injection, the cow is sleeping in a hammock, a string quartet playing for her. Her husband Henry is faced with the problem of securing an extremely heavy piece of machinery to an overhead rail in a university laboratory. He picks up a comic book one of his co-workers has brought in and muses how great it would be if he had the use of Jessii's anti-gravity gloves. The intersection of these story lines provides an abundance of humor and commentary.

Read no further if you want to save the surprises, although it's unlikely the 35mm scope print I saw from the Czech Film Archive will be making it to your town anytime soon and I don't think a video version is available.

Thursday seems to be the day of the week that the couple sleeps together. Henry is in a dream with Jessii - they are both bound and he's attempting to untie her with his teeth. Rosie sees him chewing his pillow in his sleep. She slips the dream monitor on him, sees Henry with Jessii and gives him an injection of KR VI and sends him to his separate bed. In the morning, much to his astonishment, the comic strip Jessii is alive and in his bed! And she is not the only character brought to life - the bad guys are in the bathroom.

Rosie has a feeling that her experiment has gone awry and locks the comic trio in their flat before she and Henry leave for work. Her colleagues tell her that gadlies have appeared in the lab, seemingly from abiogenesis - her serum seems to cause things in dreams to cross over into real life. At the husband's factory he and his co-workers attempt construction of the anti-gravity gloves. Both Henry & Rosie send a co-worker to their flat with instructions: Henry asks a female worker to bring back Jessii; Rosie tells her male coworker to get train tickets and send the comic characters "to Kookle".

But by the time they arrive at the flat, Jessii has escaped and the bad guys (a superman-like character and an old-west gunslinger) have broken through the wall of the flat in pursuit, crying "Liberty to dreams!". The police arrive about the same time as the coworkers (each of whom thinks the other is the one they are to bring) and take them into custody over their objections. Jessii tunes in her TV wristwatch to see Henry giving a lecture to a class at university about ideas from science fiction crossing over into reality. The classroom turns into bedlam after Jessii arrives with the strong man in pursuit.

Writer Milos Macourek has a lot of fun with comic book convention - those characters talk in "bubbles" of text. When one of them asks a young boy what time it is, the reply is "I can't read, sir." In a court appearance Jessii answers a question by telling Henry "I love you!" and he turns the "bubble" so the court recorder can read it. Henry is sentenced to jail for disruption of the peace. He uses the walls of his cell to do equations for the antigravity gloves.

Rosie and the authorities determine that the dream characters are dangerous. Rosie says "I've been charged with their liquidation." The strong man is bound and put on a conveyer belt into a crematorium to the strains of Sibelius. Just about the time they think the problem solved, the strong man appears out of the fire saying "Very refreshing - how much?" Those attempting to dispatch Jessii have similar difficulties. Tying her between two trucks pulling in opposite directions, the trucks only spin their wheels.

Henry manages to escape from jail and picks up the partially functioning gloves and uses them to rescue Jessii. They return through the cell bars (Henry pulls them apart with the help of the gloves to get back to his cell surruptitiously) and Jessii points out a mistake in his calculations.

Rosie has concocted a new serum, A VII, and finds an injection of this will cause a dream figure to be re-absorbed into a nearby subject. She injects a rabbit from a dream of their dog. It dematerializes and re-appears in the dog's dream on the monitor.

Rosie is giving the strong man a sponge bath (I forget exactly how this came to pass) and tells him "It's Thursday!" Apparently he knows what this means and escapes to inject himself with A VII. He dematerializes and also ends up in the dog's dream. Rosie, seeing this on the monitor, injects herself and follows. Henry and Jessii look at the monitor seeing the dog chasing the bunny and the wife chasing the man. Henry remarks that he'll never get away from her.

Henry teaches Jessii how to speak without the comic strip bubbles and apparently they live happily ever after.

Review by Timothy Damon from the Internet Movie Database.