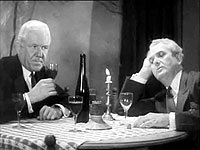 Don't be misled by Scotland Yard in the title of this movie, the only mystery here is how this film could ever be made. It starts out reasonably well, with the surreptitious passing of a coin from one shady character to another with instructions about a secret meeting. Apparently, a gang led by The Scorpion is after a death ray device unveiled by inventor Jerry Sheehan (Ralph Byrd) and his fiancée Hope Mason (Joan Barclay). The death ray knocks out an abandoned ship at sea at a range of 190 miles, and it's awesome power is seen as a deterrent to war for the civilized nations of the world.

With that interesting premise, the movie quickly spirals out of control and into a never never land highlighted by a lot of activity with no purpose. Good guys and bad guys spend a lot of time slinking down alley ways, up and down stairs, back and forth through underground passages and in and out of a French cabaret. Heroes and villains are often disclosed no more than ten feet away from each other, each oblivious as to the presence of their foes. The only redeeming feature worth noting in this entire debacle is the actual demonstration of the death ray gizmo in an inspired moment of 1930's technical wizardry; you can turn off the film right there.

And what's with the goofy Black Scorpion? This notorious villain slinks around entirely hunched over in a comical crouching position, with a lobster claw hand across his masked face. A feared denizen of the London underworld he is not, I'm at a loss as to how he put together a band of criminals.

So what does the title have to do with the picture? Sir James Blake (Herbert Rawlinson) is a retired detective of Scotland Yard, and Uncle Jimmy to Hope Mason and her young brother Bobby. Odd that his character's name is in the title, while Byrd's performance receives top billing. The most intriguing thing about the movie for me was seeing a very young Dickie Jones in the role of Bobby Mason. He would grow up to be the Range Rider's sidekick in the early 1950's TV Western; for my money the best stunt rider ever.

"Blake of Scotland Yard" receives at least one distinction from me, it's now in my Bottom Ten films of all time. Those who may be tempted to give it a try, I'll quote a character from the film - "I advise you not to follow".