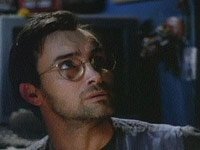 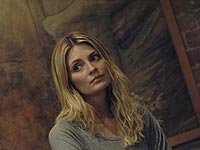 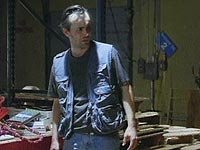 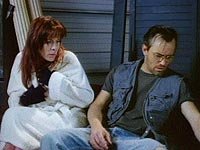 In fact, I would have given it ten points instead of nine if the dialogue had been less muffled. True, the sound recording does improve as the movie progresses, or maybe I just got used to its odd cadence, but I almost turned the movie off during the first ten minutes or so. Fortunately, I kept watching, despite the fact that executive producer Lloyd Kaufman's introductory footage on the Troma double feature DVD is even more strained, forced and self- congratulatory than usual, but fortunately, it is also rather short. No doubt Mr. Kaufman will make up for this somewhat clipped, one-take "introduction" when he extends his "humor" on the intro to Cybernator, the other feature on this Troma DVD. Before leaving "The Digital Prophet", however, I would to commend all the main actors: Jeffrey Combs as the book artist; Blake Bahner as Detective Victor Salinas, and most particularly Schnele Wilson as Detective Meg Jordan, plus executive producer Annie Biggs as Newman.