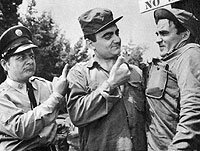 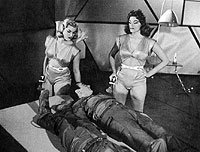 The hilarious trailer for this amateurish, ultra-low budget blend of comedy and Sci-fi became a cornerstone of my VHS library since USA Network's "Night Flight" first aired it back in the early 80's. "Look at these great big beautiful babes," says the, drooling, over-modulating 60's narrator. A revulsive Leo Gorcey wannabe puts the moves on a cute "galaxy gal" at least a foot taller than he is so his head is always at breast-level. All this and a hand-painted long shot of Cape Canaveral to boot! After ninety-seconds I was sold and had to track down a copy; this looked worse than as bad as they get. Rule of order - whenever a preview narrator feels the need to tell us that, "the laughs come fast and free," bet the opposite.

The script was written by Roger Corman regular Jonathan Haze. It's original title, "Monsters from Nicholson Mesa," was aimed at poking fun at American International honcho James H. Nicholson. Haze, best remembered as Seymour Krelboyne in "Little Shop of Horrors," intended the script as a showcase for he and fellow Corman stalwart Dick Miller. Instead, we get two comics that make Ted Danson and Howie Mandel look like Laurel and Hardy. Frankie Ray (Penn) is all eyebrows, macho Brooklynese and lame one-liners. No one ads an extra syllable to the word "bay-be-ee" quite like Frankie does! His partner Robert Ball (Philbrick) is a nasal, infantile pansy. Get the potential for comedic contrast? Some stock footage and the trailer's narrator set the place at Fort Nicholson, the World's center for atomic research. We hear talk of "the world's greatest scientists working together" and "Our first line of defense" only to cute-cut to a couple of "hand-picked" expert yardbirds that can't even handle a garden hose. If you didn't already take a hint from the (Wow!) placed next to two bimbo's names in the credits, this is the level of humor you can anticipate over the next hour.

The staging is mortifying. Stop the camera, move it 45-degrees to the right and restart the actors from where they left off. You want laughs? Stuck a guy in a garbage can, make sure the "No Smoking" sign blinds the audience, light up a cigar, toss it in the trash after you spot an officer coming and wait for the howls. A pacifist soldier weeps over killing a rattlesnake. Stupefying impressions of Warner Bros.' gangsters. Toy rayguns with dime store funnels jammed in the barrels. Not one original joke or concept and even worse, the filmmakers still can't figure out an acceptable way to present them.

While the duo goldbricks, their platoon explores a cave containing a race of extra-terrestrial tree people; stiff, burlap-clad, button-eyed extras acting scary with outstretched arms. They direct the boys to a spaceship commanded by two Amazon playmates, Prof. Tanga (Gloria Victor, Wow!) and her assistant Dr. Puna (Dolores Reed Wow! Wow!). They hail from the non-existent but real sounding planet Chalar in the Belfar star system. For ten years the galaxy gals have been on earth perfecting a race of Vegemen that they grow in soil brought from their planet. The boys treat their abduction as if it were a first date. These Naugahyde-bikini cuties are out of this world! The looming Dr. Puna begs to be taught the language of love Philbrick-style. (Instead of re- recording Cyrano Penn's romantic play-by-play, you can hear him echoing just off-camera.)

His kiss Wows! the Wow!Wow! and, using a cigarette lighter as a compass (don't ask), they make their escape. Borrowing from a cowboy film, they start a paper-mache boulder avalanche that fails to stop the oncoming "Spacetro Nuts." The "broads" call them off and Capt. Awol, a character I had hoped we were done with, is brought back into play. I suppose the filmmakers thought were playing around with genre when all of a sudden a group of Indians arrive on horseback. This allows room for plenty of "kemosabe" and "peace pipe" jokes to pad the scant running time.

After catching a buzz, the boys return to the ship. Philbrick saves the world by accidentally launching the spaceship. Puna's (Poon?) hots for the earth-man convinces Tanga to, "in the interest of science," kiss Penn. "Stand by for a charge, Bay-bee-ee!" Equating love with slavery, the dames return to earth, become suburban housefraus and wave at stock footage while their beaus are honored. A gypsy violin plays as the foursome drive off in a '57 Thuderbird with "The End" written on the spare.

A couple of short retardates cracking wise with busty babes. This sub-Neanderthal material doesn't even have the makings of a funny Playboy cartoon. It was released a few month's prior to the Kennedy assassination. Oswald not only killed JFK, his timing forever punctured the Rat Pack ethos and put a dent in Hefner's swingin' sixties philosophy. The compositions are even more offensive than the blatant sexism. Even letterboxed there's enough room to park another feature at the top of the frame.

Review by scorseseisgod-1 from the Internet Movie Database.