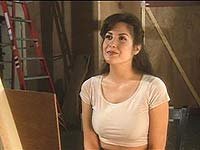 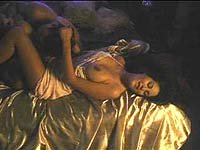 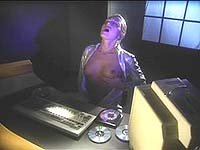 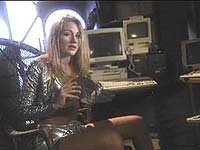 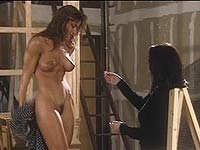 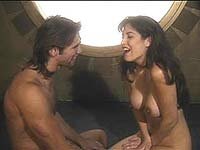 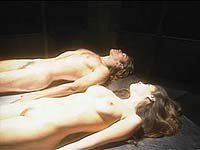 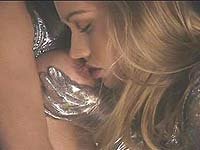 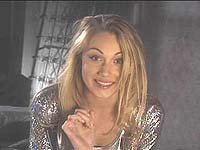 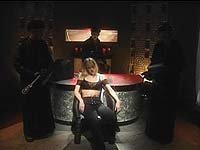 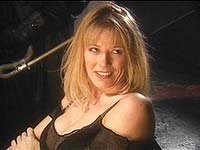 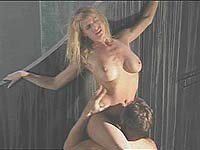 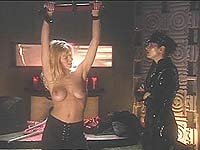 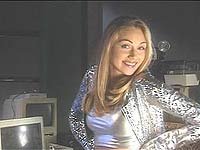 The three separate story arcs contained in Lolita 2000 are all very interesting, with some being better than others. That's one of the film's biggest problems; one scene can be absolutely incredible, while the next is almost anti-climactic, pardon the pun.

For instance, the second storyline involves a young space traveller named Casey. Her ship is mysteriously drawn to an alien vessel, where she is soon captured and imprisoned. It isn't long before Casey loses hope and gives in to her inner most desires, as she spends a truly incredible night making love with her cellmate, a beautiful feline woman.

Later, Casey is taken from her cell and placed with a mysterious man. It isn't long before the clothes are stripped away and the two have a hot sexual encounter, only to be disturbed by a group of hostile guards.

Stripped naked and demobilized by ceiling cuffs, Casey finds herself at the mercy of an alien woman she met when she first landed on the ship. The woman decides to show Casey a little discipline - that is, removing her clothes and sliding her tongue and her hands over nearly every inch of Casey's beautiful body. Although Casey does go right along with this lengthy lesbian encounter, she eventually finds a way to trick the woman into letting her go.

The third and final storyline, however, is somewhat lacking. A man enters a strange diner where, after having a brief fling with the waitress in the back room, is seemingly thrown back in time to the 1950's, where he watches a couple make love in one of the booths. He makes a couple more jumps throughout this ridiculous journey, watching love scenes that just aren't up to par, especially after watching the wonderful lesbian encounters of the last adventure.

This move, without a doubt, features some of the most incredible scenes I have ever seen in the genre. It contains two very lengthy lesbian scenes, with Casey (Skylar Nicholas) being in both - this woman is in superb shape and is strikingly gorgeous. Although the film does have it's average scenes and ridiculous concepts (not to mention the horrible acting by many of the characters), it is definitely worth purchasing - who cares about the plot, right? I recommend purchasing this film for the Skylar Nicholas scenes alone - these are some of the most erotic works I have ever seen in the industry, period.

Review by danl-7 from the Internet Movie Database.