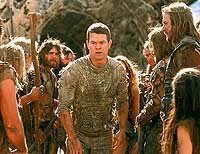 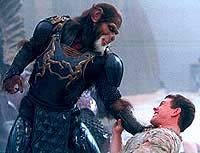 I find a lot of movies require a second glance to see exactly what you make of them. Summer blockbusters in particular, with their expansive special effects and distracting explosions; often have to be watched at least twice in order to get a clear view.

When I first saw Tim Burton's "reimagining" of Planet of the Apes ("Reimagining"? Reimagining it as what? A pile of cack?) I was reasonably dumbstruck by the scale and spectacle as to be uncertain exactly what I thought. I had it pegged down as sort-of average, with the possibility of it either being very good in its own right or a soulless, braindead money-maker. Sadly, seen again, it's the latter. By far.

Watching it again on video doesn't help either. When a film is so heavily reliant on the big screen then this says a lot about its content. Without the panoramic views, we're forced to concentrate on plot, dialogue and characterisation. Which is unfortunate as there isn't one, it's rubbish, and there isn't any.

There are good points: the opening space scenes are beautifully realised, shot with a cinematic grace, and not just computer generated FX thrown in your face. Also, credit must actually be given to the twist ending, which, while it may seem contrived, does credit the audience with some intelligence (the only part of the movie to do so) and is far more faithful to the source novel than any of the 60s70s Apes movies. And there's also the scary bit that they ripped off from Jaws.

Screenwriter Mark Rosenthal pointed out the redundant subtext of the original by noting "Today, I think we're living in the famous saying, 'The world will end not with a bang, but with a whimper.'" However, it's unpleasantly ironic to note that since the release of this movie the prospect of nuclear destruction is again a possibility, and the 1968 picture has once again become as relevant as it ever was. Even without this it took pot shots at racism and famine. Burton's view sees it take on only the novel's Gulliver's Travels-style apehuman reversal, with the odd religious musing and little else. So because it has less to say, it's forced to expand those issues, and basically beat you over the head with them for two hours. Every single line Helena Bonham Carter has is a corny platitude, while I almost heaved my guts at the moment where Wahlberg claims "sometimes even a few can make a difference", to the tune of a full-blown orchestra. Yes, the dialogue is the weakest element all right, and while the originals could be a little hammy, this one makes them look like Shakespeare. There's not one exchange approaching a genuine conversation throughout, and the trademark warmth and charm of the original is blown wide apart by a breakneck pace and one-dimensional caricatures. There's no time to react to anything, yet despite the pace, I also found myself looking at my watch several times in boredom.

One bit of merchandise I got my hands on was "Leo's Logbook", a child-orientated intro to the series with lots of glossy photos. A short affair with just a few words here and there, it lasted less than 30 pages, though told me more about the characters and their backgrounds than the film itself did. Surely that's wrong somehow? In the 1968 film we learn that Charlton Heston's Taylor has both liberal values and is embittered, both within the first five minutes. These contrasting character traits forge three-dimensionality, yet we never get to know or care about Wahlberg's desperately underwritten Leo. Little is known about him from the movie, he's just a bland nobody with a bizarre chimp fetish and nothing else. Maybe it's that he's too young, too "pop" to really work in the expected way. Yet look at how we're supposed to believe that Carter's chimp wants a romantic involvement with Wahlberg, and that the Nova replacement is jealous... yet neither of them have exchanged more than a few words with him the whole time. Bonham-Carter (is it just me or does she remind you of Lisa Minelli?) seems ten times more irritating than I remembered, and the sexy but dull Estella Warren fails to make an impact also. I won't even mention the comedy Orang-U-Tang (the "comedy" tag a misnomer, of course) or the obligatory irritating brat.

What's worse, rather than condemning humanity as the original franchise did, this movie seems to exonerate it. No longer are they the mute ancestors of their own destruction, but -' in a very Hollywood decision -' the all-speaking, innocent victims of fate. That the apes are reworked as mediaeval, right-wing sadists is also a character-lessening development, and makes Bonham-Carter's role as the sole liberal even more unlikely. Warren heads the batch of human slaves, proving that even in the wild there's still room for lipstick and mascara, if not Imac.

And what of Tim Roth? Roth's a good actor, and his performance cannot be faulted. But, sadly, the character is one note throughout. Whether he's holding his dying father's hand or just having dinner, he spends the entire time angry. That's right... he keeps going ape-sht! Even when he meets the chimp prophet, he smacks it across some caves. Maybe that's why he's so tense all the time... he needed to spank his monkey! Tee-hee! It's violent, too. I'm not against violence, but this is just ugly, repetitive violence. Violence that only exists because there's nothing else to fill the film. I didn't remember it being so brash before, either: it seems less a coherent story, more one never-ending cacophony of noise.

Two quotes from screenwriter Rosenthal, talking to magazine SFX: "the thing was given its start date and its release date before the director thought he was conceptually there; before the script was ready." "the post production on this is probably three times faster than it should have been. I think that making a film at this speeds mean that there is no time for reflection." Doesn't that say it all? Tim Burton is said to be a huge fan of the Apes movies. Maybe that's why he made this: so that Battle no longer carries the title of worst Planet of the Apes movie. If that's the case then it's a job well done.

Review by The_Movie_Cat from the Internet Movie Database.