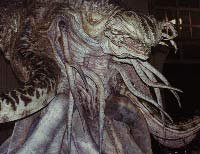 90s Horror never really gets the credit it deserves. Fans often cite the 70s or the 80s as the best decades for Horror (It's the 40s, by the way), often overlooking the 90s as the period where everything supposedly went downhill. Oddly enough, I find myself gravitating to 90s Horror far more than 70s or 80s. Give me Scream or The Blair Witch Project over Halloween (Which I still love, by the way) and The Shining any day. And one of the films that, though often unsung, helped to define that generation is the 1998 Robert Rodriguez film The Faculty.

I have very few flaws with The Faculty. If I had one major complaint, it would be this; it's not at all scary. To be honest, it's not even creepy. The aliens and those they possess never really come across as intimidating. Eccentric and darkly humorous, definitely, but never frightening. Their behavior and abilities lack consistency; sometimes they possess hosts post-mortem, sometimes they possess them alive. Sometimes they have heightened aggression, sometimes they're overly friendly. The film never manages to really capture the sense of dread and suspense that other High School horror films like Scream or Jennifer's Body managed to pull off.

What kept me invested in The Faculty's emotional stakes, despite the underwhelming monsters and lack of scares, were the characters. I find it unlikely that somebody could watch this film and not find themselves relating to at least one of the teens, they feel more like characters out of a Stephen King novel than your typical 90s teen Horror film. The Faculty does a wonderful job of introducing us to a cast that subverts the expectations and cliches of their social cliques to become something more three dimensional and real; Zeke's a delinquent stoner, but also deeply intelligent and a leader who's wise beyond his years and not as invulnerable as he lets off. Delilah's a popular cheerleader, but with a genuinely sweet and sincere side. Casey's an awkward nerd and a social introvert, but he's incredibly proactive and stubborn and surprisingly tough when the situation demands it. Stokes is an edgy and hostile Goth using her aggressiveness as a shield for her own insecurity and hopelessly in love with someone who represents everything she should (In theory) hate. Even Stan, the dumb, superstar jock, is ambitious and kind, self aware of his own flaws with a burning desire for knowledge and intellect, for significance. These teens are all so fully realized in ways that many characters of High School horror movies before simply weren't. None of them were sloppily thrown into the film for shallow reasons; to die or to provide comic relief or to shove in a popular actor or actress. They're all clearly developed and they all have a strong narrative purpose.

The story does a wonderful job initially presenting them for the hollow stereotypes and cliques that they fall into while slowly progressing them into the more fleshed out and three dimensional humans they are underneath. If there's one thing that works about the aliens in this film, it's their significance to the character's progression; while the aliens offer a quick and easy change for the teens into conforming to societal norms, resisting their assimilation of mankind is what offers them genuine growth and progression while still retaining their individuality.

The performances are all fantastic. Josh Hartnett is magically charismatic in the role of Zeke, making him instantly likable roguishly charming while still imbuing the character with a deep sense of pathos to make him more relatable. Elijah Wood plays the role of a timid geek about as well as you'd expect, but what really caught me off guard was how convincingly badass he could be when the situation called for it. Shawn Hatosy has a couple of bad reads, but he really steps up his game in the third act and gives one of the most sympathetic and deeply human performances in the film. Clea Duvall similarly shows her best acting around the third act, bringing genuine poignancy and humanity to the role of an outcast trapped in her own self constructed bubble of hostility. The actors playing the teachers aren't half bad either. Robert Patrick is darkly hilarious as the over-the-top psycho Coach Willis, Famke Janssen is clearly having a lot of fun as the shrinking violet-turned-vengeful-vixen Ms. Burke and Jon Stewart does a surprisingly good job in a straight man role as Mr. Furlong.

While the horror side of this horror comedy doesn't work, the comedy most certainly does. The dialogue is much more intelligent than you would expect and there are some really clever comedic lines and moments in this film that you might not notice on first watch. Casey accidentally calling Schindler's List historical fiction had me rolling, that went completely over my head on first watch.

I absolutely love this soundtrack, one of my all-time favorites. The Faculty has a really impressive roster of indie and alternative rock bands that really help to contribute to the nostalgic, feel good atmosphere of the film. Stabbing Westward, Neve, D Generation and the ironically named Garbage all put in excellent work here and this soundtrack really benefits the film's tone significantly.

In closing, The Faculty is a great 90s teen Horror comedy to watch. It's not at all scary, and it severely lacks suspense, but it's a really good film all the same. In fact, I'd easily consider it Robert Rodriguez's best film.

(Final note; wow, that Harry Knowles cameo has not aged well at all. Especially given how Harvey Weinstein was an Executive Producer.).

Review by TheMovieDoctorful from the Internet Movie Database.