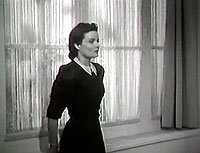 Taking part in a poll on ICM for the best films of 1939XI started to search for movies that are overlooked from the year in French cinema. Finding his takes on Film Noir to be magnificentXI was excited to stumble on a Sci-Fi title co-written by Henri-Georges ClouzotXwhich led to me shaking the world.

After having various people escape his grasp, (including a feisty prostitute)scientist Jean Durand gets a man on the run to test his machineXwhich has been created to correctly predict the day and time someone will die. Proved by the man dying that it does workXDurand puts his creation on the marketXand at a high fee gives the public the chance to find out when they will die. Handing out future death datesXDurand finds this to have a greater effect on the public than he expected.

View on the film:

Taking a rare journey into Sci-Fi for this era of French cinemaXthe adaptation of Francis Didelot and Charles Robert-Dumas's novel by Henri-Georges Clouzot and (what appears to be a pseudonym) J. Villard combines man overstepping the mark in scienceXwith a sharp allegorical horror. Whilst not a Film Noir, Clouzot wraps the characters in the pessimism of the genre, as the discovery of their "death date" causes the patient to lose the will to liveXand Durand (somewhat) genuine vision for how the machine can be used, become engulfed in the commercial possibility of handing out death certificates. Turning the machine on when the government was becoming sticker on censorship as the horrors of WWII appeared, Clouzot and "Villard" give the Sci-Fi a harsh allegorical edge. Littering the screen in front pages on the recession of 1937- 1938Xthe writers reveal the vast wealth divide in Durand's treatment of the elite on the machine, which gets destroyed by the united workers fearing the machine is killing their livelihood.

Keeping the Sci-Fi rooted in the present, director Richard Pottier & cinematographer Robert Lefebvre have infectious fun building the machine of tomorrowXwith the flickering lights and bulky design giving the device a warmXold fashion Sci-Fi feel. Counting down the clock of death, Pottier gives Durand's creation a brooding atmosphere, as tightly held close-ups stylishly move aside into the shadows, as each customer meets the end of their countdown.

Reuniting in the excellent 1946 Film Noir La foire aux chimères, Erich von Stroheim and the beautiful Madeleine Sologne both give marvellous performances as Emil Lasser and Marie-France Lasserre, with Stroheim filling Emil with a grave, concerned manner over the machineXwhilst Sologne turns Lasserre's care-free love for Durand into lingering doubtXas the machine takes control of his life. Bringing the machine to life, Claude Dauphin gives a fantastic performance as DurandXwhich avoids "Mad Scientist" white hair by Dauphin giving Durand a simmering lack of empathyXwhich causes the world to shake.

Review by morrison-dylan-fan from the Internet Movie Database.