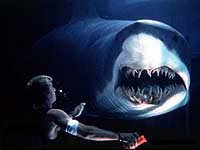 Summer is the Silly-Movie season. You know the type, a tale whose actions defy most laws of physics, characters embrace cliched stereotypes, some cockamamie premise and plots that usual involve risk to the world and "life as we know it." Yet if done right, Hollywood's domination of this market is unparalleled. You forgive the lapses to enjoy the thrill ride. Popcorn movies, whose mass belies actual caloric weight. Although cotton candy is probably a better analogy; big fluffy masses of sugar that is quickly forgotten. Usually, when a few years go by and the effects are no longer state of the art you're embarrassed to admit you actually thought the film was great at one time. Although a few do stand up pretty well.

While the Jurassic Park films have become, well, dinosaurs now that the CGI work is common place and the stories are the creakiest Speilberg has ever produced, a handful would qualify for the Average Joes' Hall of Fame if such existed. "FaceOff" from two summers ago is prime example. Expert filmmaking from top pros. Renny Harlin's comeback vehicle from the back to back mistakes of "Long Kiss Goodnight" and "Cutthroat Island" (did anyone else see this bloated, miscast spectacle besides the ten people I saw it with?) tries for this box office bull's eye and misses. But, "Deep Blue Sea" comes awfully close and as such is a fun failure.

Early on I knew this was a film that requires its audience to turn off its collective brain. After a semi-homage to "Jaws'" opening and the Dramatic Set-up (research facility has to show investor Big Discoveries are imminent or lose funding) it quickly begins to rack up the improbable plot developments: all the other staffers leave for the weekend, a big storm is coming, a lot of furtive looks between the scientists (i.e., we did a Bad Bad Thing), equipment that fails for no reason other than the set-up for an even bigger disastrous chain of events.

Every year Discovery channel has it's hugely popular Shark Week special, something the writers and shark effects supervisors ignored at their own detriment. Admittedly, how many know that mako sharks are rarely over 14 feet is and can leap out of the water is debatable. However, one can imagine the added menace the latter could have added if the writers had done more research beyond the "Ooh, that one looks scary!" variety. That more people than not know how sharks look and move is not debatable. These are some of the worst animatronic and CGI effects work ever put on screen.

The mechanical sharks rarely seem believably alive, save for a few shots of them slicing the surface of the water. 25 years of technological innovation has not improved upon the benchmark mechanical effects work of Robert Mattey (not Joe Alves) for "Jaws." Think about the first time you get a good look at the great white gliding serenely under the boat (trust me, that is an effects shot). Nothing in "DBS" comes close to suggesting the beauty of that shot. Hands down, the worst element of all the effects work though is the computer graphics. The supervisors must all have grown up in rural Kansas or the like, having never seen a living fish on even the TV. Watching these ichthyians swim about is like watching children play with dime store rubber sharks, their hands digitally removed. Producers really need to realize that CGI does have limits.

I do have a lot of admiration for fact the writers like to play with the audience's expectations. Those who are destined to be "Survivors" and those bound for "Fish food" are not who you think they will be, which caused such startlement in one scene I heard honest to God screams. And the Captain Morgan joke was funny enough that I actually laughed out loud (not saying much; I laughed out loud at "Wild Wild West" once too. ONCE...). In the end, I can't really recommend spending money to see "Deep Blue Sea" in the theater unless leave most of your brain at home.

Review by Swampfox from the Internet Movie Database.