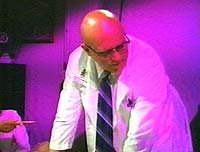 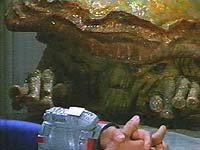 This film was quite the experience. If I could sum up this film in a single sentence I would say that it has all the qualities one might expect from a made-for-TV kid's Saturday morning special. This film feels like it is somehow a continuation of or conclusion to a cheesy kids' show series and, in some ways, there's something a little nostalgic about it.

With that said, the film is not very good. Almost everything about the way the plot moves, and the character interactions all feel contrived. The writing makes the film feel like they were working off a first draft. For example, the Planet Patrol send an agent to Earth to stop Kraa but the US government has agents who are constantly after him. Here's the big question I kept asking myself throughout the runtime of this film though: if the Planet Patrol are the law enforcement of the galaxy (or something) shouldn't they be able to coordinate with all the planets under their jurisdiction to help fend off anybody who tries to violate the sovereignty of the other planets? Shouldn't the US government be aware of the Planet Patrol or do they not know about them? And if that's the case, which other planets do humans come from if the people from the Planet Patrol aren't from Earth? Shouldn't Earth be aware of aliens like Kraa and the Italian Alien since Lord Doom has attempted something like this before? Why haven't the Planet Patrol tried to help Lord Doom find a warmer planet since his motivation is to take over Earth so he can live on a planet that isn't dying? It's alluded that there are a number of different Planet Patrol ships in the beginning, so why is it just up to that one single crew? Kraa was sent to Earth to destroy the civilizations on Earth but the government agency notices that Kraa is only going wherever the Italian Alien goes so what's his goal? I might sound like I'm nitpicking here but so many of the conflicts in this film are so unnecessary and make little sense and I was constantly being taken out of it as a result.

The acting is remarkably all over the place. Some performances consist of near-monotone delivery accompanied with arm acting, some of the acting is extremely hammy (especially in Lord Doom's case), some of the performances are the kind of acting you would expect from a B-movie film, and some of it is with an Italian accent that sounds more like Super Mario than Mario did in the Super Mario Brothers Movie. In my opinion, the acting is the most intriguing part of this film and is what makes it feel the most like a made-for-TV kids' special.

This is, very obviously, a low-budget film and because of that the special effects really show it. The miniatures look like something out of one of the early seasons of Thomas the Tank Engine and the Kraa suit looks like it would have been something impressive in the 1970s. The worst part of the effects is when Kraa is tearing through high rise buildings as it is very clear that the buildings are made out of some kind of papercardboardcardstock material as when Kraa initially breaks through the building with the Godzilla 98' logo on it, it looks more like a football player running through the paper signs with their names on them. It has not held up very well, the fake high rise buildings mixed with the little toy cars and model power lines just look incredibly cheap now in 2020.

Kraa is supposed to be the main attraction to this film and the ultimate menace but he's more of a backdrop to the US government guys. The climax of the film just consists of him standing around and staring at the weapon that will kill him while our heroes fight the government guys and, eventually, get into a cheesy and anti-climactic fight with Lord Doom. There was very little tension through this film because of that and the film seems only half-heartedly to heighten the tension.

The cinematography in this film is strange. One of the things that didn't make very much sense to me was whenever the Italian Alien would talk, there was only ever one flat, close up of his face. We have very little idea of what he is supposed to look like save for the shots of him that we see while other people are talking, yet somehow it's still ambiguous. Also, there are some scenes where the camera makes some very strange moves, like during one scene on the Planet Patrol ship where the camera twists from a sideways view to a right-side-up one to show the other characters. It's a creative shot but I have no idea why that was done, and it left me more confused than anything else.

Kraa! the Sea Monster isn't really that good. I wouldn't even say it's so bad bad it's good, it's just a forgettable kind of not good. As I said twice before it's like a made-for-tv kids' special which exists to serve as a conclusion for a season of a Saturday morning kids' series or something. It's not offensive, but if you like monster movies, you probably won't get much out of this unless you're looking for something new and you've reached the bottom of the barrel as is. It's not particularly good but you can certainly do worse.

Review by Raptorclaw155 from the Internet Movie Database.